Entering a Golden Age of Innovation in Computer Science

Today’s announcement that the University of Washington’s Department of Computer Science & Engineering will be elevated to a school and will bear my name is truly an honor. UW has always felt like home to me for several reasons.

In the university library my father helped lead, as the Associate Director of Libraries from ‘60 to ’82, I spent hours and hours as a kid devouring piles of books so I could follow the latest advances in science. And I spent a lot of time in the graduate computer lab as a high school senior. Of course, I didn’t belong there, but the professors looked the other way—until we wore out our welcome, as you can guess high school students would do eventually.

I still have the letter from the computer lab director, Dr. Hellmut Golde, kicking us out. A couple lines still make me laugh. 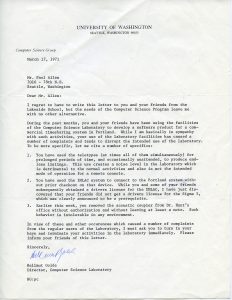 A copy of the letter sent to Paul Allen by UW kicking him out of the computer lab.

“Earlier this week,” the letter reads, “you removed the acoustic coupler from Dr. Hunt’s office without authorization.” It’s true. Guilty as charged. Since no one was using it, we’d taken it home so we could keep working off campus. And here’s the punch line. He said we’d taken it “without leaving at least a note. Such behavior is intolerable in any environment.” And that was the nail in our coffin, I guess. I’m still embarrassed we didn’t leave a note!

With that stern letter, our free time on UW computers came to an unfortunate end.

Another reason the University of Washington is such a special place to me is that it’s where we built the Traf-O-Data machine. While Bill Gates and I handled the software side of it, the machine itself was built on campus by a UW student named Paul Gilbert, a partner Bill Gates and I recruited into our high school business venture. Paul did an amazing job turning the first 8-bit microprocessor in Seattle into a real computer.

The idea was simple enough.

We wanted to automate the traffic-measuring process, part of which required high school students to count the hole punched into a tape each time a vehicle drove over a black tube laid across the street. We wondered if there was a less expensive solution than a minicomputer to processing the tapes. I had read about the new 8008 chip from Intel and suggested we try to build a machine based on it.

Objectively speaking, Traf-O-Data was a failure as a company. Right as our business started to pick up, states began to provide their own traffic-counting services to local governments for free. As quickly as it started, our business model evaporated.

But while Traf-O-Data was technically a business failure, the understanding of microprocessors we absorbed was crucial to our future success. And the emulator I wrote to program it gave us a huge head start over anyone else writing code at the time.

I hope the lesson is that there are few true dead ends in computer science. Sometimes taking a step in one direction positions you to push ahead in another one.

And relentlessly absorbing the latest in technology can help prepare you for that new path toward success.

To think that when we were building the Traf-O-Data machine there wasn’t even a computer science department at all. And now this department is one of the best in the nation, with this next phase of expansion expected to elevate the school into the nation’s Top 5 computer science programs.

This impressive program trains and educates some of the world’s best and brightest. Matter of fact, I was fortunate to be able to convince UW professor Oren Etzioni to lead the Allen Institute of Artificial Intelligence. He and his team are doing tremendous work in Fremont.

The promise of artificial intelligence and computer science generally vastly outweighs the impact it could have on some jobs. In the same way that while the invention of the airplane negatively affected the railroad industry, it opened a much wider door to human progress. As more intelligent computer assistance comes into being, it will amplify human progress.

I envy today’s young computer science and engineering students. I really do.

They have a wonderful opportunity to put their skills and expertise to use solving the world’s biggest problems. The amount of computing power available for their projects and the facility of the programming tools they can use far exceed anything we had. Today’s smartphone is many thousands of times faster than the CDC6400 students used back in 1972! And today’s computer programs are really only constrained by the user’s imagination—instead of by the small amounts of memory computers had back then.

A few examples of ambitious efforts today’s young innovators could pursue might be:

We truly are entering a golden age of innovation in computer science, with new techniques such as deep learning at our disposal, and collaboration opening up new ways to build innovative projects.

I look forward to watching the new Paul G. Allen School of Computer Science and Engineering continue to make profound contributions both to the field and to the world. I look ahead with anticipation to the advances that will continue to flow from the school—advances that I hope will drive technology forward and change the world for the better.

Rebuilding the Computer that ‘Changed Everything’

Rebuilding the Computer that ‘Changed Everything’