This link provides interviews and images from:

Q: When was the USS Indianapolis found?

The USS Indianapolis was found on Aug. 19 by the R/V Petrel, a research vessel owned by Paul G. Allen.

Q: Where was the USS Indianapolis found?

Mr. Allen’s team located the Portland Class heavy cruiser in the Philippine Sea, 5,500 meters below the surface. Because this is a war grave and property of the US Navy, the specific location is only provided to the US Navy for them to administrate.

Q: How was the ship found?

The original search area was defined and prioritized as a 2,600 square nautical mile area in the western part of the North Pacific Ocean, between Guam and Palau in the Philippine Sea. The ship was found using a combination of historical records, detailed undersea topographical data and advanced technology aboard the R/V Petrel.

Q: What was Mr. Allen’s motivation for searching for the USS Indianapolis?

Since his youth, Mr. Allen has been fascinated with World War II history, inspired by his father’s service in the U.S. Army. Allen has a passion for technological innovation and preserving those elements of wartime history.

Q: Can you tell us about the technology you used to find the Indianapolis?

In addition to state-of-the-art sonar and high definition cameras, the two main pieces of equipment include:

Q: Have you learned anything new about the fate of the ship?

We are still actively exploring and capturing data from the site. We are sharing the data generated by our expeditions with the Philippine and Japanese governments. As we continue our evaluation of the data that we have collected, we will continue to share it with the world.

Q: What is going to happen with the ship? Are there plans to move it?

The site was left undisturbed by the research team, and they are following all appropriate procedures for exploration of naval war grave sites. The ship is the property of the US Navy and will remain undisturbed.

Q: Are you planning to recover any artifacts from the ship?

We are not currently planning a recovery and will work closely with the Navy on any action taken to honor the crew and its rightful place in history.

Q: Are there plans to release a documentary, feature film or book on the expedition?

The US Navy is working on a documentary but Vulcan currently has no plans to produce or release any commercial content on this topic.

Q: I wish get in contact with Paul Allen and his expedition team, how can I contact them?

Please direct all emails to press@vulcan.com and the team will ensure it is delivered to the appropriate people.

Q: Will there be a memorial service?

We are working with the Navy to find the best way to honor those who served.

History of the USS Indianapolis

Commissioned in November 1932, the USS Indianapolis (CA-35) was a 9,800-ton Portland Class heavy cruiser that operated in the Atlantic and Pacific during the peacetime years. During World War II, the Indianapolis served with honor from Pearl Harbor earning 10 battle stars and frequently operated as the flagship of the Fifth Fleet. 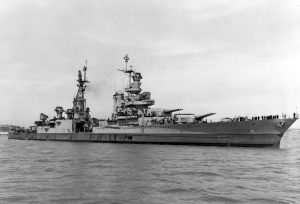 The loss of USS Indianapolis (CA-35) was a tragic moment following the completion of a secret mission, which contributed to the end of World War II. After a successful high-speed run delivering crucial components of the first operational atomic bomb, “Little Boy” from California to a naval base on the Pacific island of Tinian. The cruiser was en route from Guam to Leyte when she was torpedoed by Japanese submarine I-58 in the early hours of July 30, 1945.

The U.S. Navy cruiser tragically sank within an hour. Due to communications and other errors, her loss went unnoticed until a passing aircraft spotted survivors several days later. Approximately 800 of the ship’s 1,196 sailors and Marines survived the initial strikes and sinking, but after 4 to 5 harrowing days and nights drifting at sea, only 316 men survived. The Indianapolis remains to be the most tragic maritime disasters in U.S. naval history.