By Frank Thompson, Deputy Assistant Director for Collection Management with the Naval History and Heritage Command

On the evening of October 6, 2019, I was sitting in a darkened control room with a highly professional team of underwater explorers waiting for the chance to glimpse a long lost relic of a pivotal World War II battle.

I was aboard a small ship in the middle of the Pacific Ocean. As the Remotely Operated Vehicle (ROV) crept close to our target area, the first images of a large object that had not been seen by human eyes in 77 years came across the screen, the wreck of what could only be one of the Imperial Japanese Navy aircraft carriers sunk during the Battle of Midway! As one of the carrier’s large 8” guns came into view, a huge smile came across my face with the realization we were looking at the remains of either the Kaga or Akagi! (We later concluded the wreck was that of the IJNS Kaga.)

As the ROV probed the wreckage, my smile faded with the realization that I was looking at a war grave for over 800 Japanese sailors and aviators. The destruction was incredible. For her time, Kaga was a large aircraft carrier. She was 812 feet long and displaced over 38,000 tons. She carried an air group of ninety aircraft and had a crew complement of over 1,700 men. On the morning of June 4, 1942, dive-bombers from USS Enterprise (CV-6) struck Kaga with four or five bombs setting off a chain reaction as her fueled and armed aircraft exploded creating an uncontrollable conflagration that resulted in her loss later that evening. Viewing the footage from the dive is a sobering realization on the reality of war. Our search continued for the other three Japanese carriers lost during the battle. 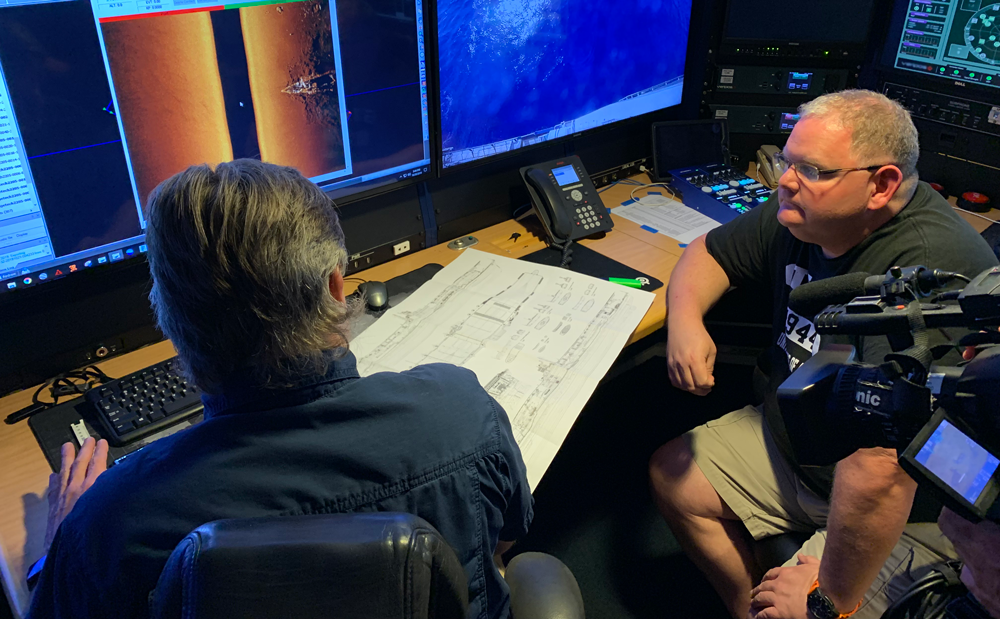 Thompson and Robert Kraft, Director of Subsea Operations for the R/V Petrel, discuss a sonar image of IJN Akagi.

Our efforts paid off on the morning of October 20, 2019 as the unmistakable image of a wreck came into view. We were confident we had discovered the final resting place of Vice Admiral Chuichi Nagumo’s flagship Akagi. Like her consort, Kaga, Akagi was a large carrier for her time and represented the best of the Imperial Japanese Navy’s carrier fleet. To be certain, the team conducted a high frequency dive mission with the AUV.

The images it recorded confirmed that we, indeed, found the Akagi. This amazing journey actually began back in Honolulu on August 30 when I boarded the research vessel Petrel, a 3370-ton vessel originally built to service the petroleum industry, but now enjoying a second life exploring the underwater frontier. 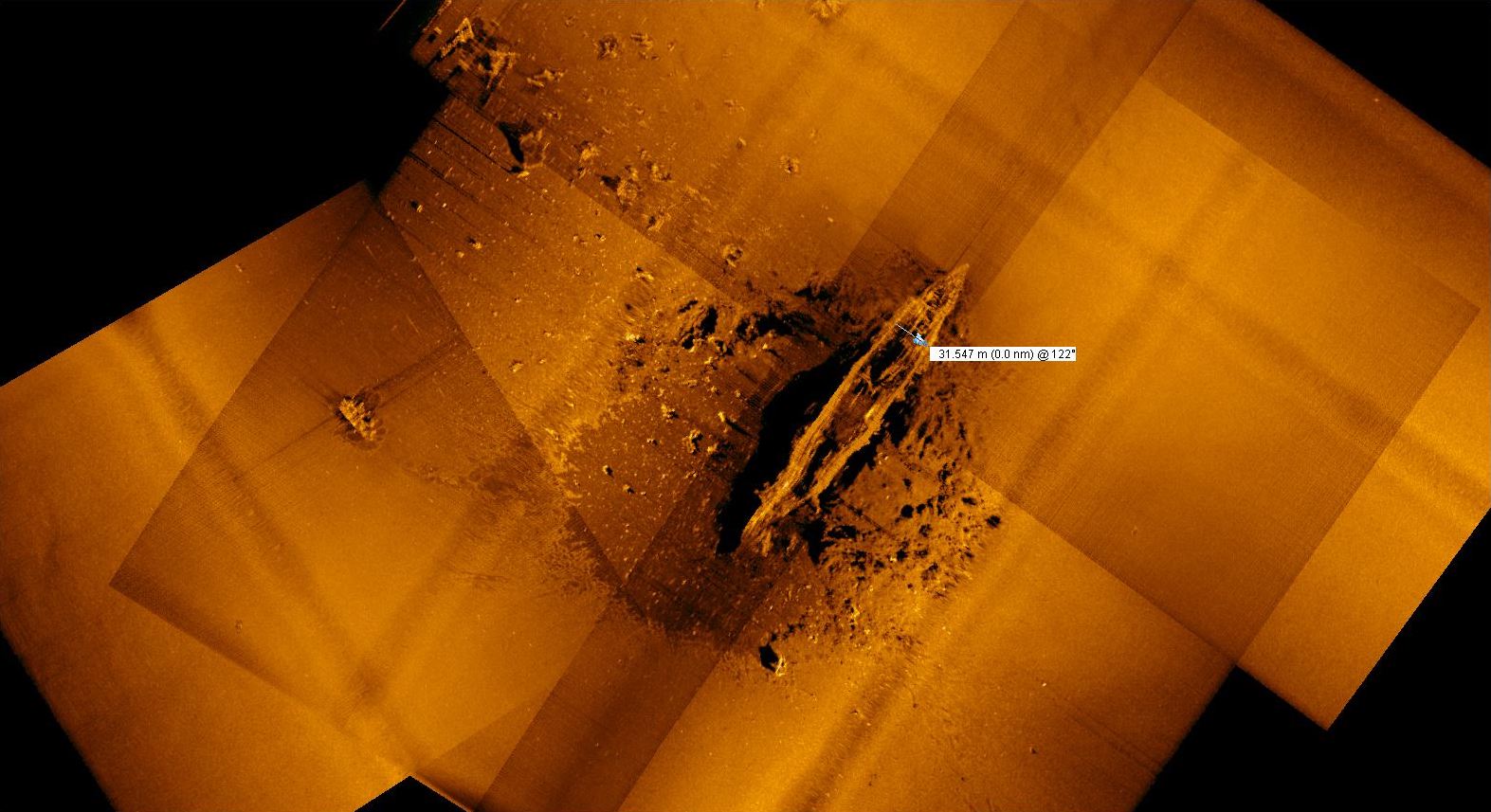 A sonar image of IJN Akagi.

The Naval History and Heritage Command (NHHC) selected me to be the representative on this Petrel expedition after signing a Memorandum of Agreement with Vulcan, Inc., Petrel’s owners, for the non-intrusive research of sunken military craft from the Battle of Midway. Fought June 4-7, 1942, the Battle of Midway represents the point where the tide of World War II began to turn in favor of the United States.

The United States Navy losses amounted to one fleet carrier, one destroyer, about 150 aircraft and about 300 casualties. The Imperial Japanese Navy lost four of their finest fleet carriers with their air groups, one heavy cruiser and over 3,000 casualties. With the advances made in technology designed to explore the ocean’s depths, I was eager to see what new insights of the Midway battle we would find. 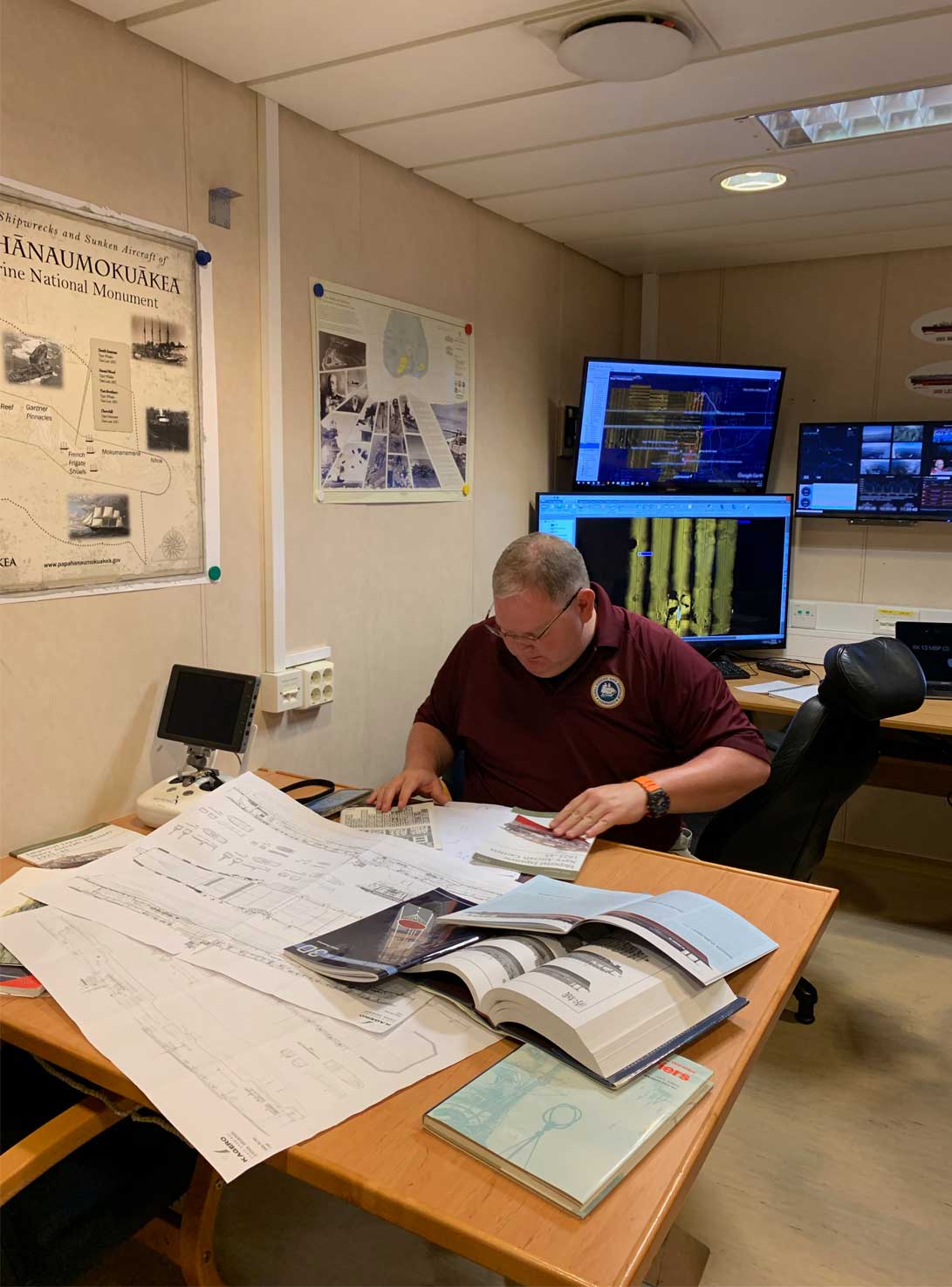 Thompson looks over historical documents and records after the discovery of IJN Akagi.

Unlike land battles, sea battles leave no visible remains on the surface. Apart from the one Japanese airstrike on Midway, the open ocean served as the battlefield. The ship and aircraft wrecks over the battle site lie over 5000 meters below the surface. From the start, the Petrel team impressed me with their drive and determination. From day one, I never heard anyone say, “If we find.” It was always “When we find.” Indeed, the team’s research prior to the mission was top notch. They assembled information from a wide range of sources, Japanese and American, and pinpointed an area to begin the search. During the transit to the search area, I had the opportunity to interact with the Petrel crew and the team that operate the ROV and the Autonomous Underwater Vehicle (AUV).

Although they come from all over the globe and different backgrounds, they function as a highly professional, exceptionally trained, and highly competent team. When we arrived on station during the early morning hours of September 7, all was in readiness for the first dive! Each mission consisted of a run by the AUV over a search grid of five lanes. Each mission usually took 13 hours to complete. Although we did not find a wreck on that first dive, we did find evidence of debris on the sea floor. Following the debris located during the subsequent missions, we eventually came across the wreck sites that we would later identify as Kaga and Akagi.

With each mission, it became apparent to all of us that we were over a vast battlefield. It also became apparent that records of the battle, such as position reports and navigation charts are not always accurate. As I write this, we have covered an area about 600 square nautical miles, and in every search grid, we identified some debris. During our search, we experienced some technical issues with both the ROV and AUV. However, the indefatigable efforts of the Petrel team kept the mission going with as little interruption as possible.

I can say that this experience is truly a significant highlight of my career. It is an honor and privilege to work with this cohesive team of dedicated explorers. Their efforts are unlocking a never before seen world to us, and redefining how we look at naval history. I am not the first NHHC employee to ride Petrel, nor will I be the last. It is my hope that work relationships like this one continue to inspire others to study history.