Bitterly cold and starkly beautiful, the icy expanse of Western Antarctica is one of the most remote locations on Earth, and in the water that flows below the massive ice shelves lies the data humanity needs to better understand climate change. In order to uncover this hidden data and tackle the gaps in climate change research, Paul G. Allen Philanthropies granted just under $2 million to the University of Washington to lead an international partnership in the deployment of autonomous drones to explore the mysteries below polar ice shelves. 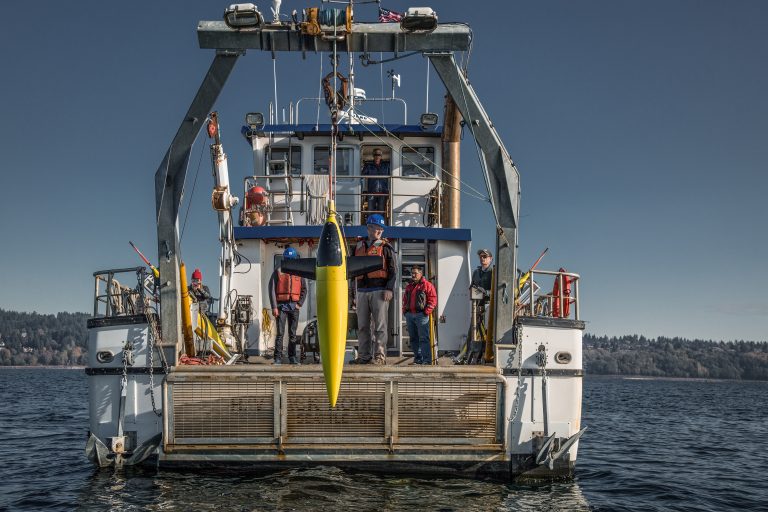 The UW team tests the Seaglider in the more hospitable waters of the Puget Sound.

This grant will allow the researchers to use innovative technology to document long-term interactions between the ice shelf and the warm oceanic flow below, as well as refine robotic approaches for sustained observations beneath polar ice shelves. Over time, this collection of previously inaccessible data will help scientists understand whether these massive polar ice shelves are likely to melt faster, or even collapse, which could be catastrophic for coastal cities.

To gather this critical data will require a bit of risk, a bit of luck, and a lot of time at the bottom of the world. In December 2017, the scientists will travel from Christchurch, New Zealand to the Pine Island Glacier in Western Antarctica, where they will launch autonomous drones called Seagliders and an array of floats. The ocean currents will carry the drones into the ice shelf cavity, where they will spend several months cruising the current collecting measurements and documenting the waters’ interaction with the glacial ice along the path taken by warm, inflowing waters. This is where the risk comes into play, because there is no way for the scientists to control, or even know, what sort of obstacles the gliders and floats may encounter on their journey through the complicated geography of the ice shelf cavity.

However, like most projects supported by Paul Allen, a risk is taken in order to reap important scientific rewards. Never before have scientists been able to capture long-term data to better understand the mysterious physics where oceans and ice melts meet. This new data will tell scientists how climate change can impact large polar ice sheets and improve modeling and predictions for sea level rise.

Spencer Reeder, Director of Climate and Energy for Paul G. Allen Philanthropies told Geekwire, “This is part of a series of philanthropic investments that Paul has made, all really focused on this improved understanding of how the Earth is changing, and responding to climate change in particular.” 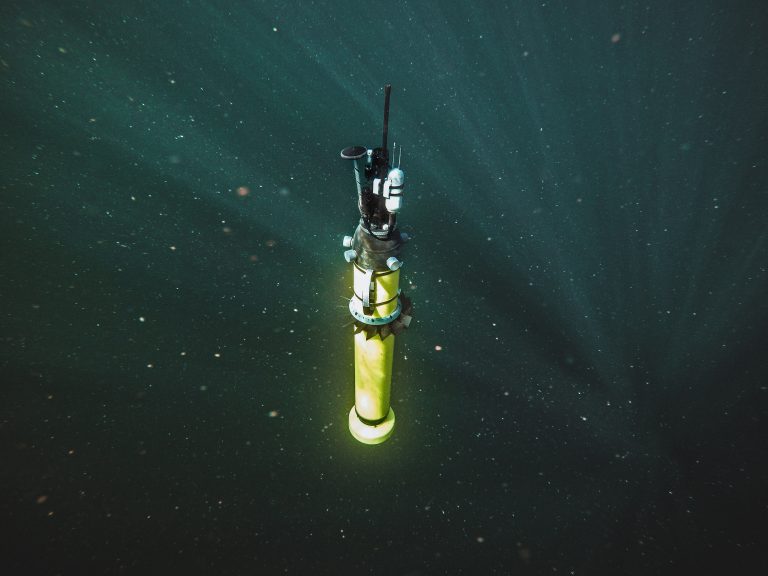 The floats have potential for long-term missions beneath ice shelves, but will face severe challenges including complicated cave geometries, unknown currents and a completely inaccessible environment, making retrieval impossible.

“We want data that helps us plan for the next 100 years, not just the next 10 years,” said Craig Lee, senior principal oceanographer at UW’s Applied Physics Laboratory and professor at the School of Oceanography, while he and the team tested the technology in the Puget Sound near their lab.

Like all Paul Allen-supported projects, the robotic exploration of ice shelves in the Antarctic takes a collaborative approach; from the development of the technology to overcoming the simple fact that it’s extremely hard to reach the ice shelves of Western Antarctica. The Office of Naval Research and the National Science Foundation supported the development of long-endurance Seagliders and profiling floats specifically adapted for conducting multi-month missions under sea ice. The UW team will hitch their ride to the Western Antarctic alongside the team from the Korean Polar Research Institute aboard Ice Breaking Research Vessel Araon, who will also provide deployment and observation support and collaborate on data analysis. The team will return from their mission in the Antarctic in mid-February 2018 with the first round of data.

Paul Allen and the team hope the data will not only help create more accurate predictions and modeling, but also help democratize the collection of this hard-to-reach data below polar ice shelves.