Note from the Editors: As the world faces a series of unprecedented storms, it has become critical that scientists gather better data to help weather forecasting and climate prediction. Paul G. Allen Philanthropies has committed $4 million for a multi-year project to provide a large array of Deep Argo floats to NOAA. The deployment will be facilitated by Paul Allen’s research vessel the (R/V) Petrel and NOAA will provide the scientific expertise for the project and long-term operation of the new array. The following is from NOAA oceanographer Dr. Gregory C. Johnson on the scientific implications of deep ocean observations, which is key to understanding the role of ocean temperature, salinity, and current variations on weather, climate, and ecosystems.

I am delighted to be the NOAA lead on the new multi-year “Jump Starting Deep Argo” project, a partnership between NOAA’s Pacific Marine Environmental Laboratory and Paul G. Allen Philanthropies. We will observe oceanographic conditions in the Brazil Basin of the western South Atlantic Ocean with a large array of autonomous profiling robots called Deep Argo floats. Each float will collect a profile of high quality temperature and salinity data from the sea surface to the sea floor every 15 days, then transmit these data by satellite to shore where they will quickly be made publicly available on the internet. This will be the largest deployment of Deep Argo floats to date, roughly doubling the number of floats globally, and is the first array to cover an entire deep ocean basin. Our Brazil Basin array is a significant addition to the small pilot arrays currently deployed in the South Pacific, South Indian, and North Atlantic oceans. 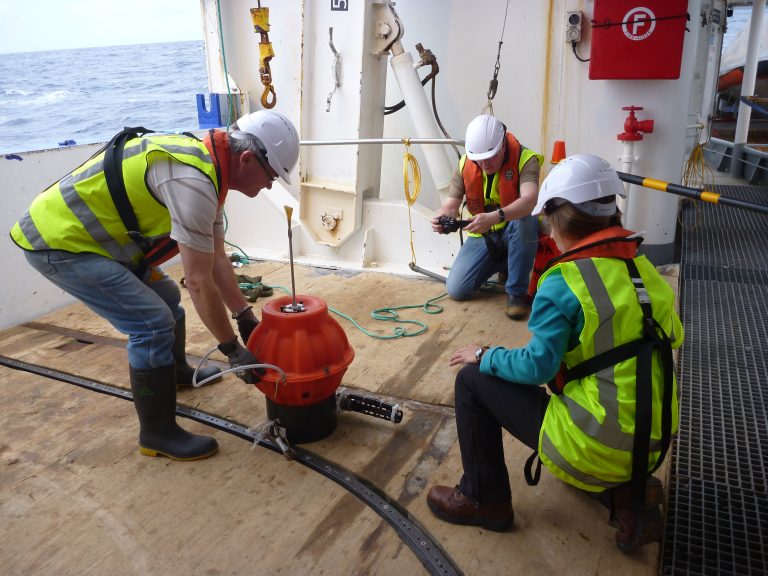 Deep Argo builds on the success of Argo, an international array of almost 4,000 freely drifting robots (Argo floats) that measure temperature and salinity profiles in the upper 2000 m of the ocean globally. I am proud of my contributions to Argo since its inception in 1999. It has revolutionized oceanography, reporting unprecedented amounts of public, real-time, high-quality oceanographic data. These data are vital for understanding the roles of ocean temperature, salinity, and current variations in affecting weather, climate, and ecosystems, but have been limited to the upper 2,000 m of the ocean for technical reasons.

Previous ship-based oceanographic surveys have revealed warming and freshening of the coldest, densest bottom waters that sink around Antarctica and spread northward into much of the deep ocean. However, we can only afford sparse global ship-based surveys of the ocean below 2000 m at decadal intervals. Hence recent technology development efforts, which now allow the manufacture of Deep Argo floats that can sample to 6,000-m depth. Our new project will help to build capacity to observe nearly all the global ocean except for the deepest ocean trenches and permanently ice-covered regions near the poles with these autonomous robots, tracking deep ocean variations much more efficiently and closely than before. 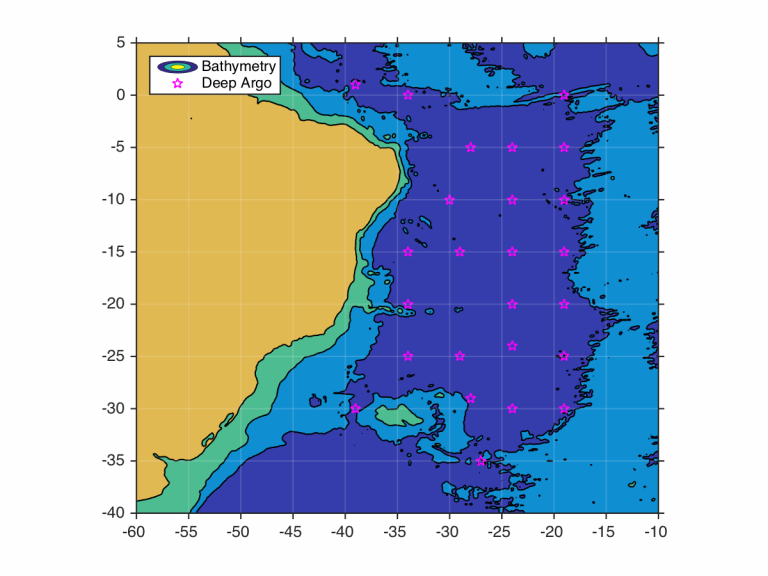 Our Brazil Basin array will be the first to Deep Argo design specifications. We chose this basin because we have observed, from ships, warming of the cold Antarctic Bottom Water that flows northward through it over the past three decades. Furthermore, just above, slightly warmer North Atlantic Deep Water flows southward there. Both of these ocean features are part of the global thermohaline circulation, sometimes called the “great ocean conveyor belt”, which is linked with global climate variations. In haiku form: