In the fall of 2017, Shedd Aquarium launched a new research project focused on the Bahamas’ shark populations, assessing shark abundance and carrying capacity in the island nation’s waters. While our focus was sharks, the beautiful thing about research projects based on video surveys is that the video captures more than just the subject of the study, it also captures the living world below the sea, which often leads to unexpected observations that can drive science forward. Having previously worked with Dr. Demian Chapman who leads the Global FinPrint research project, we teamed up to collect video footage in the Bahamas during our shark research expeditions to contribute to the study and made an unexpected discovery in the process. One day in the field, while reviewing the footage from a BRUV (a baited remote underwater video) that we had deployed for Global FinPrint earlier that day, a member of the research team noticed a garden eel colony among the seagrass. As we watched the footage, the garden eels retracted into their burrows.

Much to our surprise, it was a shark that swam into frame. This behavior by the eels was curious, as these large sharks would be very unlikely to try to eat the garden eels. So why did they retract? Was this a blanket response for any large creature that may pass by?

Upon returning to Chicago, we investigated the published literature to see if we could figure out why the garden eels responded to the presence of the shark. It turns out, I wasn’t the only one at Shedd Aquarium interested in garden eel behavior. In Shedd Aquarium’s Teen Learning Lab, one of the students had a fascination with garden eels and was very familiar with the existing literature of their behavior, of which there was very little. They were a great resource as we began to compile the existing research on this behavior. 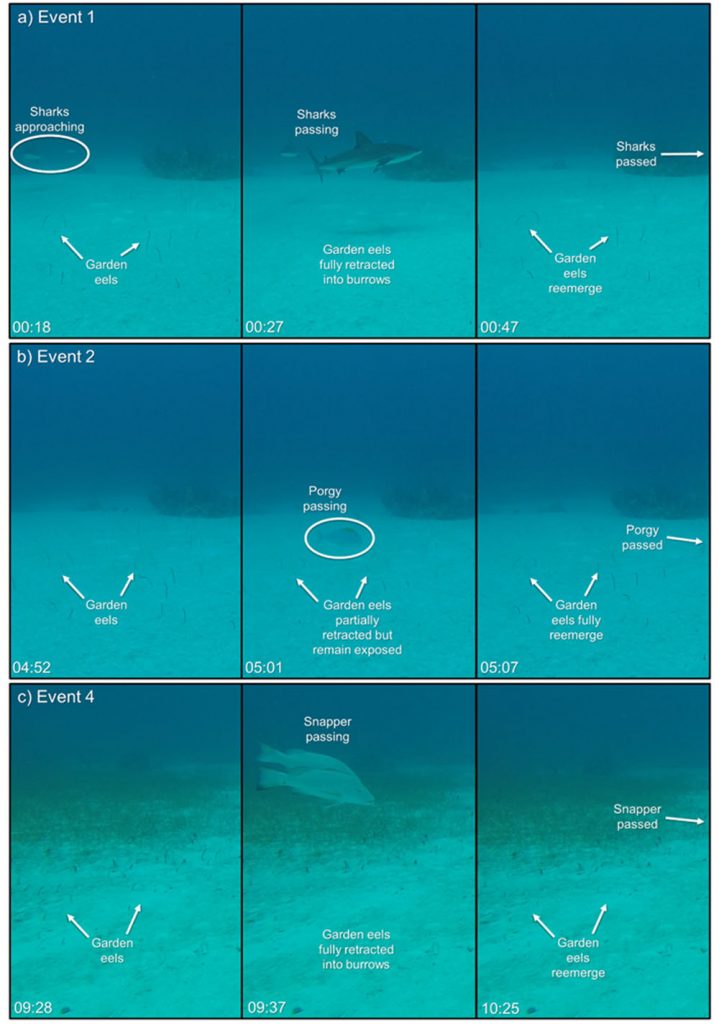 After connecting with Global FinPrint’s headquarters at Florida International University, we learned the FinPrint team had additional video surveys that recorded garden eels reacting to sharks and other marine creatures from the same region. So, with the eel enthusiast in the Teen Lab as an additional resource, we were able to identify and document additional garden eel encounters with larger marine creatures from FinPrint’s video footage, totaling 10 independent events with five different species. This unexpected outcome from a study designed to document shark abundance and biodiversity helped advanced our understanding of garden eel behavior. Without the additional video footage from FinPrint, and without Shedd Aquarium’s support of a burgeoning marine biologist in the Teen Learning Lab, this new discovery might not have been possible.

As we learn more about shark populations around the world, by looking closer, we can also learn more about the other vital species in our oceans. While garden eels often go unnoticed, they play an important role in the ocean’s food web. It’s important to conserve all species – even the less obvious and charismatic ones. We also need to keep supporting spaces for young people to pursue their passion for science, like the Teen Learning Lab at Shedd Aquarium. This Shark Week, we celebrate the many conservation research projects, like Global FinPrint, that help us find ways to protect sharks and we also celebrate the people that have done their part to protect them already, like the Bahamas. Alongside our partners including Global FinPrint, Shedd hopes to Keep Sharks Swimming well into the future and hope many will join us.