Deep Data: Tracking Climate Change From the Bottom of the Ocean

Note from the Editors: Chanelle Cadot, a float research associate at the National Oceanic and Atmospheric Administration Pacific Marine Environmental Laboratory (NOAA PMEL) in Seattle, has just concluded an epic adventure across our oceans - 6,000 nautical miles of them to be exact. Cadot is working with a crew aboard a University of Washington research vessel to deploy floats that will gather deep ocean data- data that could help with weather forecasting and climate prediction as the world faces an uncertain future.

It's all part of the Deep Argo project, a multi-year partnership between NOAA PMEL and the Paul G. Allen Family Foundation. The project will ultimately conclude aboard Paul Allen's research vessel, the R/V Petrel, with the deployment of a larger array of Deep Argo floats.

But for now, float deployment begins aboard UW's R/V Thompson. Below, Cadot provides an inside look at her work on the research vessel as she travels from Cape Town to the Brazil Basin. 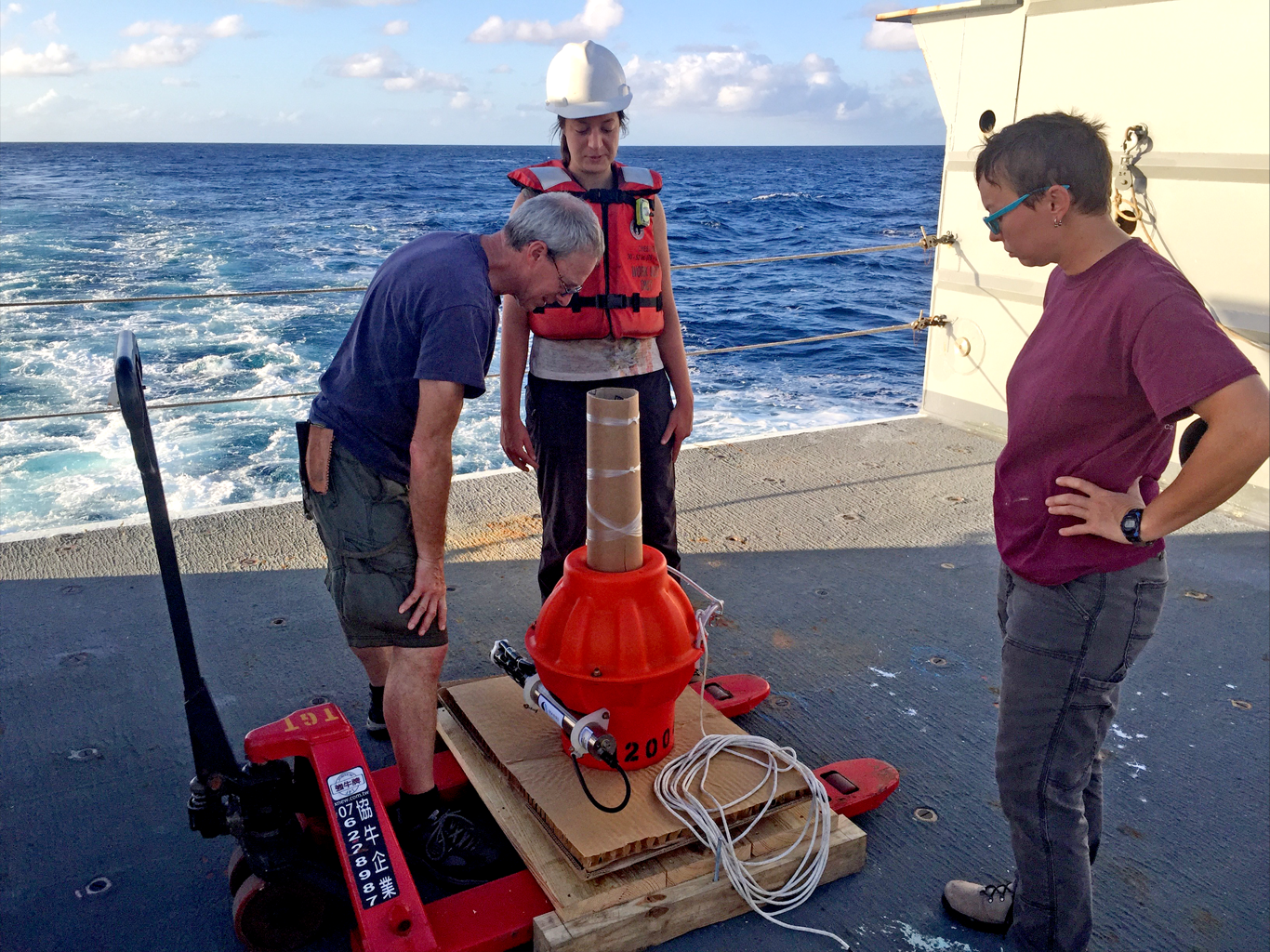 It turns out deep ocean research doesn’t necessarily mean futuristic submarines piloted by the likes of James Cameron. I confirm this realization as I size up my lab’s instruments called Deep SOLO Floats on the deck of the R/V (Research Vessel) Thompson.

I am in Cape Town, South Africa, but soon I will be leaving with the ship to the Brazil Basin where I will deploy my floats that will be starting the Deep Argo Project. In partnership with Vulcan Inc. and Paul G. Allen Family Foundation, our lab is going to deploy a pioneering array of deep floats to gather important ocean data in the deep water off the coast of Brazil.

While in port, I’m doing final checks of the floats to make sure they’re ready to go in the ocean. I am a float technician at NOAA PMEL in Seattle, so this check is routine for me, although being in Cape Town is novel. Instead of the familiar silhouette of the Cascades, Table Mountain looms in the background. Somehow, I am still able to focus my attention on the ongoing tests, and I confirm that the floats are ready. I put them away until their deployment in the Basin, but not before a shipmate has a chance to remark on their appearance.

“I thought they’d be bigger," he remarks wryly.

Despite their arguably underwhelming appearance, these little instruments are revolutionizing our ability to get measurements of the deep. Originally developed by the Scripps Institute of Oceanography and now manufactured by Marine Robotic Vehicles (MRV), the Deep SOLO is capable of descending to 6000 meters. Aside from the deepest of oceanic trenches, the ability to descend to 6 kilometers will easily get you all the way to the seafloor almost anywhere in the ocean.

The Deep SOLO float is actually an extension of Argo. Argo is an international program that maintains a fleet of nearly 4000 autonomous robotic profiling floats that report profiles of salinity, temperature, and depth from the surface to 2000 meters, year round, all over the world’s oceans.

Over the past 20 or so years, Argo floats have contributed to climatological models and been instrumental to understanding and quantifying the heat budget for the top 2000 meters of the ocean. Despite this progress, the deep ocean remains vastly under sampled, leaving large uncertainties in estimations of its heat content. The entire ocean, not just the first 2000 meters, plays a crucial role in Earth’s climate system, especially in the global transport and balance of heat. With global warming, a staggering amount of the excess heat gets absorbed by the ocean. Therefore, in order to understand how much the planet is warming and predict how it will continue to warm in the future, we must know the energy budget of the ocean, including that of the very bottom waters.

The Brazil Basin was chosen for the Deep Argo project because past measurements from ships here have shown trends of warming in the bottom of this very deep part of the Atlantic. These abyssal waters are comprised of Antarctic Bottom Water flowing northward from Antarctica, which forms when very cold dense water off the coast of Antarctica cascades down the continental slope, filling much of the ocean’s abyssal layers. A warming of these deep waters carries profound implications for worldwide oceanic processes. The profiles that comes from these two Argo floats, and the future deep array in the Basin will provide the data necessary to monitor changes in Antarctic Bottom Water continuously for several years, which will provide crucial insight into the state of our changing climate.

Once we leave Cape Town, it takes a little over a week to get to the first deployment location. The deployments are fairly straightforward, although they take a village to pull off (shout out to the marine technicians and deckhands who help out!). We use the stern A-frame to lift each float off the deck, over the rail, and into the water. Once the float is safely in the water, I give a line a sharp yank, which opens the release shackle and frees the float. Once deployed, the float is designed to sink right away, so I barely have time to process the successful deployments before they are out of sight, plunging down for their first diagnostic dives. Just like that, they’re off to gather data.

The floats have been in the water for over a week now. In that time, we have crossed the equator and made considerable headway to our destination. Every night I go outside on the deck to gaze at the stars, and I note the change and location of the constellations, the timeless way sea navigators have traversed our great oceans. As we get closer to the United States, I conclude this journey with an attitude of gratitude and optimism. I am grateful to Vulcan and the Paul G. Allen Family Foundation for making investments in cutting edge data projects like ours, as well as to MRV for their hard work in manufacturing the floats. I also feel thankful to UW and everyone affiliated with the Thompson for so graciously allowing me to sail with them and deploy floats. Lastly, I feel fortunate for working at my lab in NOAA PMEL with a group of people who are inspiring, supportive, and providing crucial data for understanding the world’s present and future climate. I end eagerly awaiting the our next trip out, this time on Paul Allen’s research vessel R/V Petrel, to deploy as many as 28 more floats in the Brazil Basin, completing the array there. I think most of all I am looking forward to the data that will begin to resolve some of the key puzzles of the deep and help us work toward a better future.

Crew members Laura Cooney and Brian Clampitt inspect the Deep Argo float next to Cadot on the aft deck of the R/V Thompson. Photo: David Zimmerman

After the float deployments, a PIRATA buoy was deployed as part of the Global Tropical Moored Buoy array. Photo: Chanelle Cadot