In 2017, Paul Allen embarked on a diving excursion, not unlike he had many times before. As an avid diver, Allen had explored underwater areas throughout the world, from the Galapagos to the Red Sea. In his words, the ocean was his “great escape.” But on this trip, near the end of the third and largest global-scale coral bleaching event to date, Allen saw first-hand how crisis facing corals was changing the place he loved. The vibrant colors and flourishing ecosystem he once explored were replaced with brittle, white and brown structures. The reef had been decimated. What Allen experienced wasn’t just an isolated case. In fact, studies suggest one quarter of the reefs worldwide are damaged beyond repair, with another two-thirds under serious threat.

Already a key player in the ocean conservation space, Allen returned from his outing with a big ask of his team at Vulcan: “Save the coral reefs,” recalled Lauren Kickham, director of impact at Vulcan.

And he was clear that is wasn’t only the one he had just seen, he meant “all of the corals.”

“What made this really hard,” said James Deutsch Vulcan’s Director of Biodiversity, “is that, unlike stopping elephant poaching, we don’t actually yet know how to save the world’s coral reefs from climate change.”

"Paul [Allen] challenged us with a bold and audacious goal—save coral reefs around the world...the Allen Coral Atlas is our first step toward fulfilling that mission"
💬 | https://t.co/rnsoCKTOnc #Tech4Good pic.twitter.com/jQLW2Eiybc

Today, the resulting platform, the Allen Coral Atlas, launched the first-ever global image of the world’s coral reefs and the first detailed maps showing the composition and structure of five reefs throughout the world. The maps include depth and water color, and decipher a plethora of geological and biological features. With Allen Coral Atlas’ unprecedented level of detail, conservationists will be able to detect changes in coral health, and better plan and target restoration. 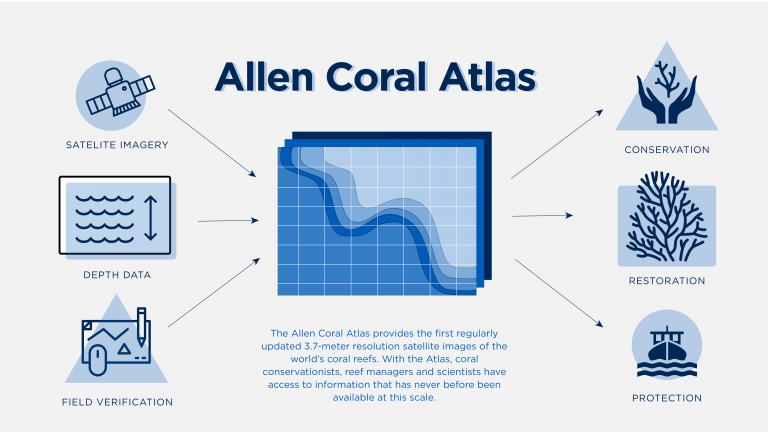 With much of the world’s reefs in danger, the Allen Coral Atlas system provides the opportunity to be proactive rather than reactive.

“We’re applying a new algorithm to these images to detect and analyze any changes in coral cover and health,” said Greg Asner, Staff Scientist for Carnegie Institution for Science. “Over time, we’ll be able to determine what corals are bleaching and where, giving us the information needed for response and conservation.”

The world’s coral reefs not only support 8,000 species of fish, a quarter of all the fish species in the world’s oceans, but provide over $30 billion a year in critical services to people — daily food for 500 million people, livelihoods from tourism, and protection from dangerous storms.

The Allen Coral Atlas aims to empower educated coral protection and restoration, so that reefs eventually flourish. The platform lives among a network of of environmental protection efforts and projects launched by Vulcan and Paul G. Allen Family Foundation.

Developing new platforms and data sets is a key way that Vulcan seeks to make an impact on global challenges in ocean health, bioscience, wildlife conservation and others.