High-Seas Hunt: Behind the Scenes of ‘Chasing the Thunder’

Ocean Warriors: Chasing the Thunder is a Vulcan Productions high-seas documentary about the Sea Shepherd’s epic 110-day, 10,000-mile chase of the “Thunder,” considered the world’s most notorious poaching vessel. Across two seas and three oceans, the marine activists hunted the fugitive fishing ship through massive ice floes, storms-tossed seas, a near collision and violent clashes until the Thunder dramatically sank, burying the evidence of its crimes on the bottom of the South Atlantic.

Vulcan Productions’ “Chasing The Thunder” aims to raise awareness about ocean health and illegal fishing through the film and it will be at EarthxFilm April 21 and 22. EarthxFilm is a 21st century film festival that uses the power of film and emerging media to raise awareness of environmental and social global issues The full Ocean Warriors series can still be streamed on Animal Planet

The Sea Shepherd crew and documentary filmmaker partners at Brick City take us behind the scenes of shooting to get an inside look at some of the film’s most dangerous moments. 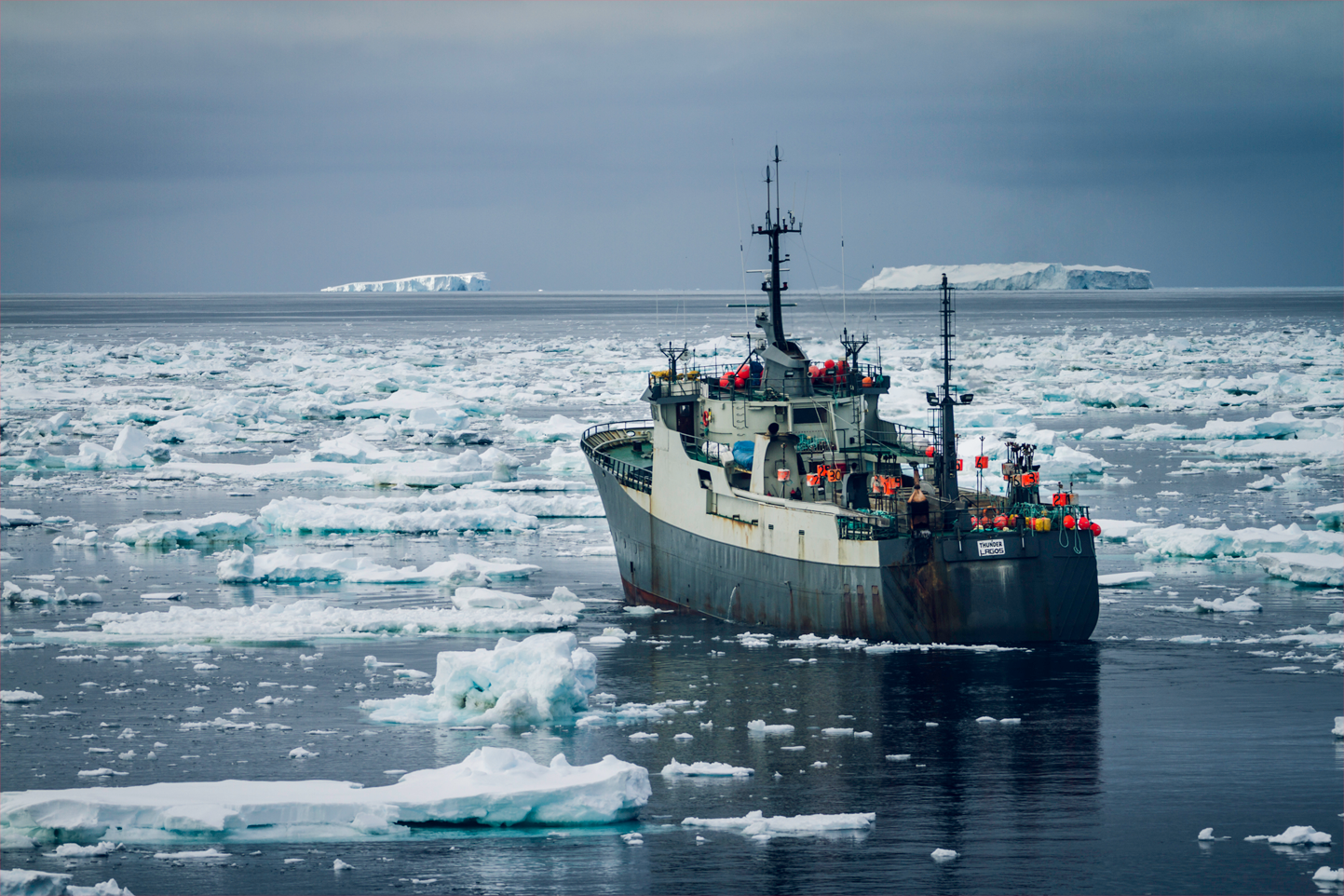 The chase of the Thunder started in the “Shadowlands”, the ice fields of the Southern Ocean, and lasted 110 days. From beginning to end it was a harrowing journey. Captain Peter Hammarstedt and his team faced daunting odds but surged forward. In this photo, Hammarstedt looks into the minefield of icebergs: “We’re just gonna take a pounding.” Photo credit: Simon Ager 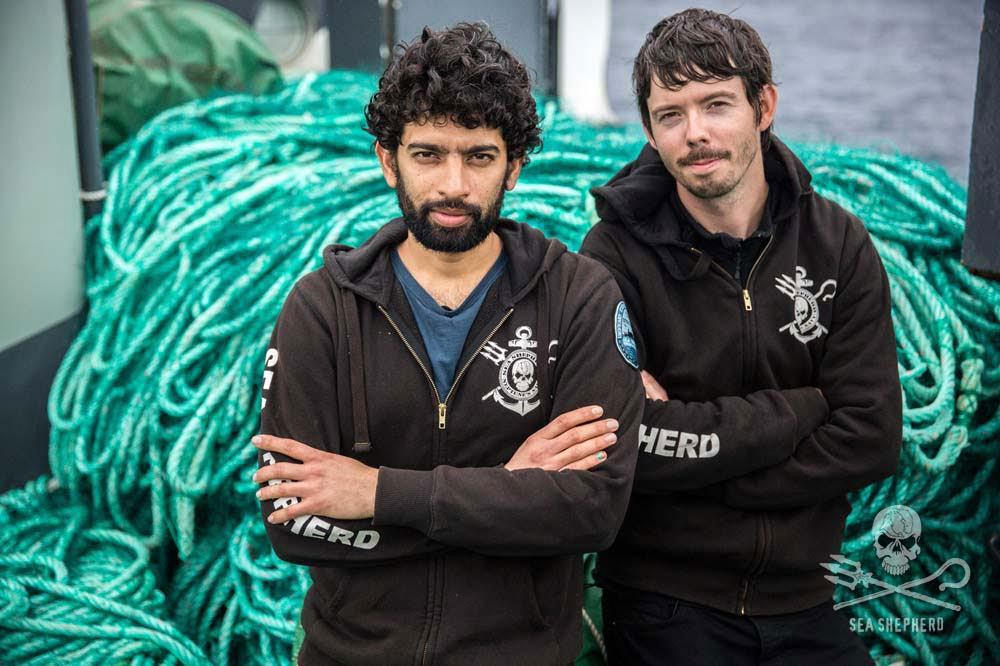 Captain Sid Chakravarty (left), Captain Hammarstedt (right) and and the rest of the crew have worked aboard the Sea Shepherd to fight illegal fishing and help save our ocean’s wildlife. “For the past 10 years, Sea Shepherd has been defending whales in the Southern Ocean,” said Hammarstedt. “This year we’re defending Patagonian and Antarctic toothfish.” Toothfish are coveted by poachers because they are known as Chilean Sea Bass in restaurants throughout the north. They are flaky, delicious and very expensive. “The fact that these fish live in the most remote waters in the world makes these poachers feel like they can get away with anything,” said Chakravarty. Captain Chakravarty ultimately joined the mission with his additional Sea Shepherd vessel. Photo credit: Simon Ager 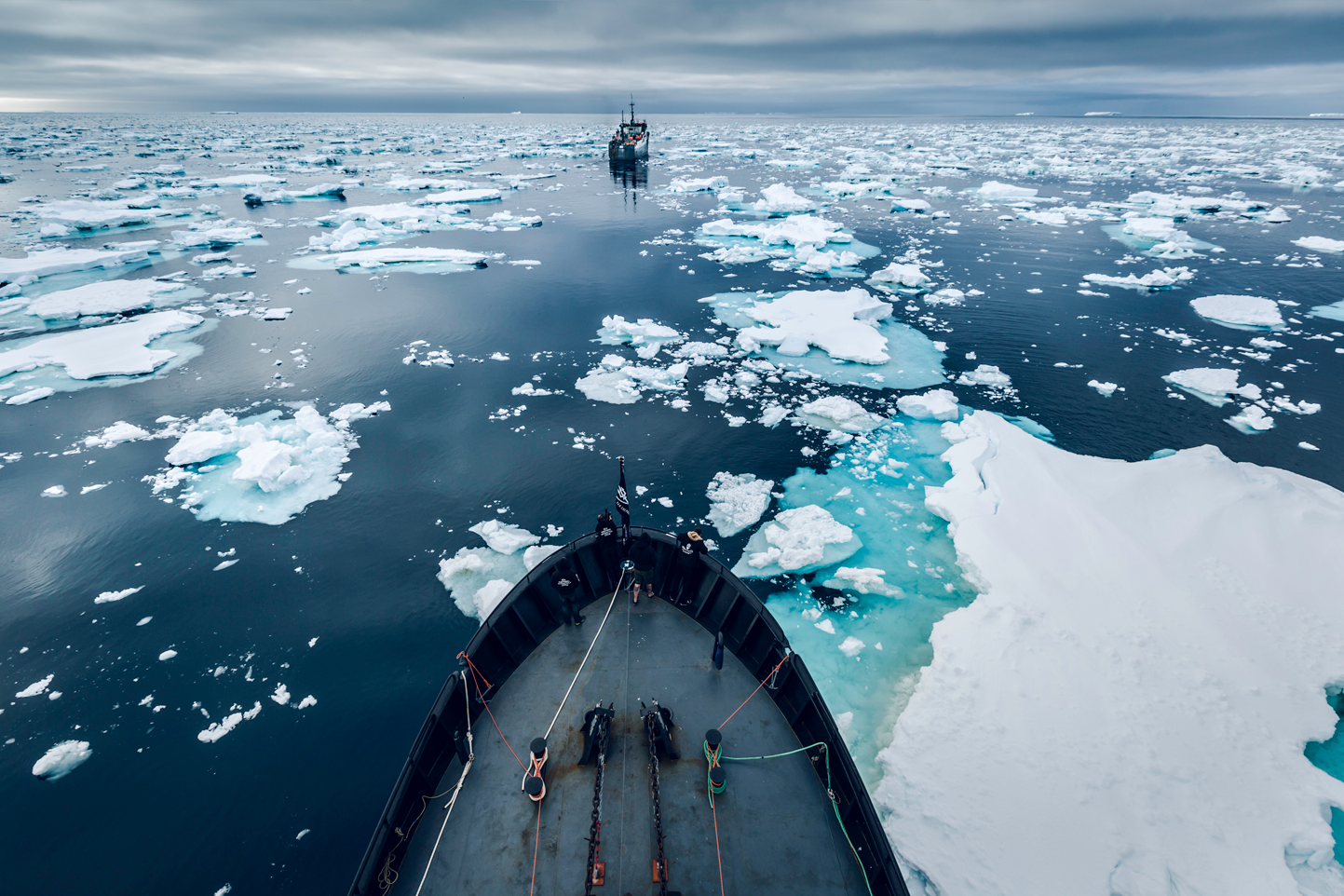 Captain Hammarstedt knew that Interpol had put out a Purple Notice on the Thunder, stating their crimes and calling for them to be brought in. “It’s possible that they’re armed and I have no doubt that they will be willing to use violence to stop us from intervening,” said Hammarstedt. “Our mission is to find these bandits, and shut down their illegal fishing activities.” Photo credit: Simon Ager 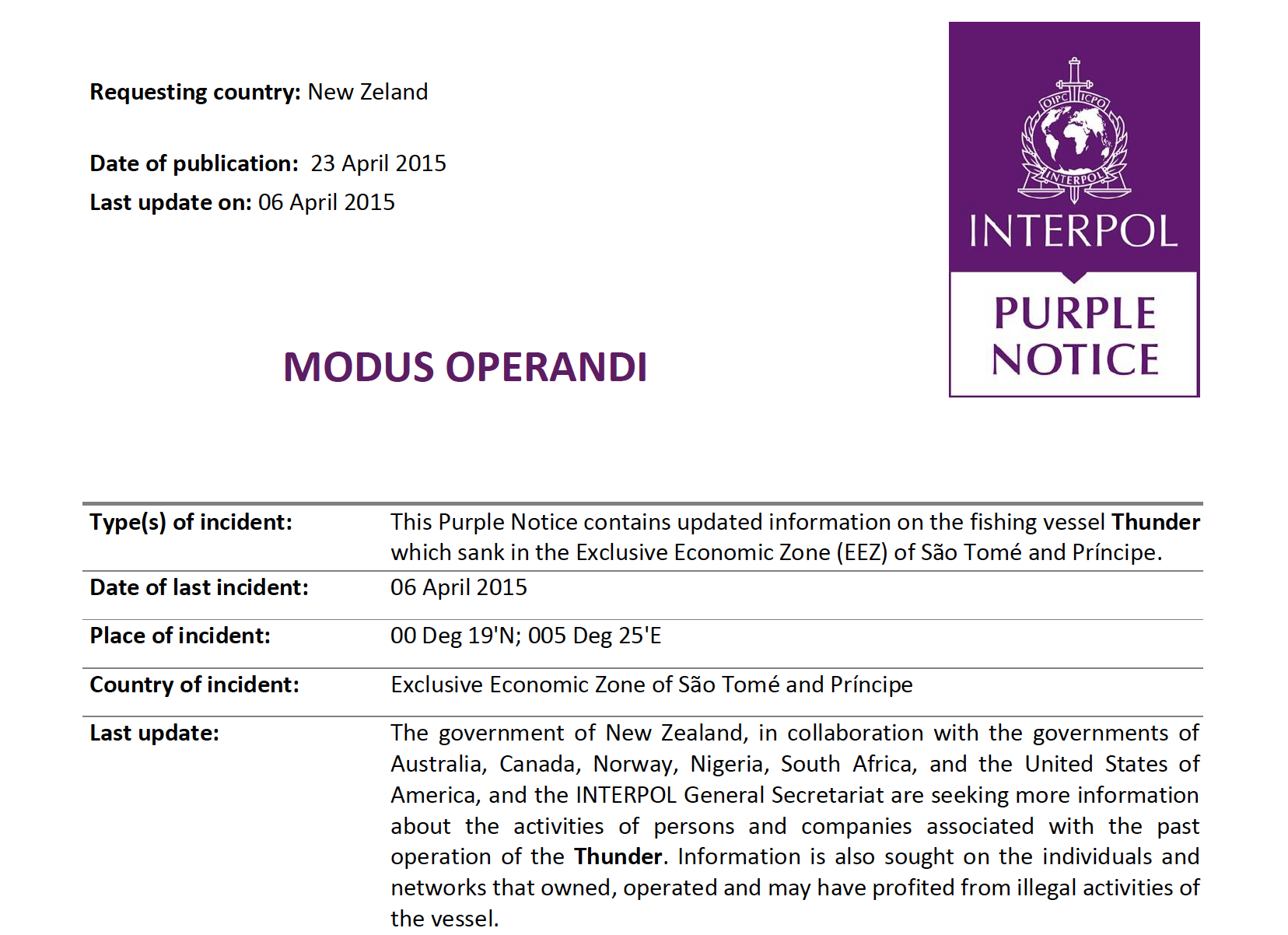 “The Thunder is one of the vessels who have been involved in unregulated fishing in the Southern Ocean for some time,” said Alistair McDonnell, head of Interpol’s illegal fishing division Project Scale. “Six boats, two trips a year, $5million a trip, been at it 10 years; we can do the math. This has been an iconic, iconic crime gang. To them, fish is basically money swimming around in the sea.” Photo credit: Interpol 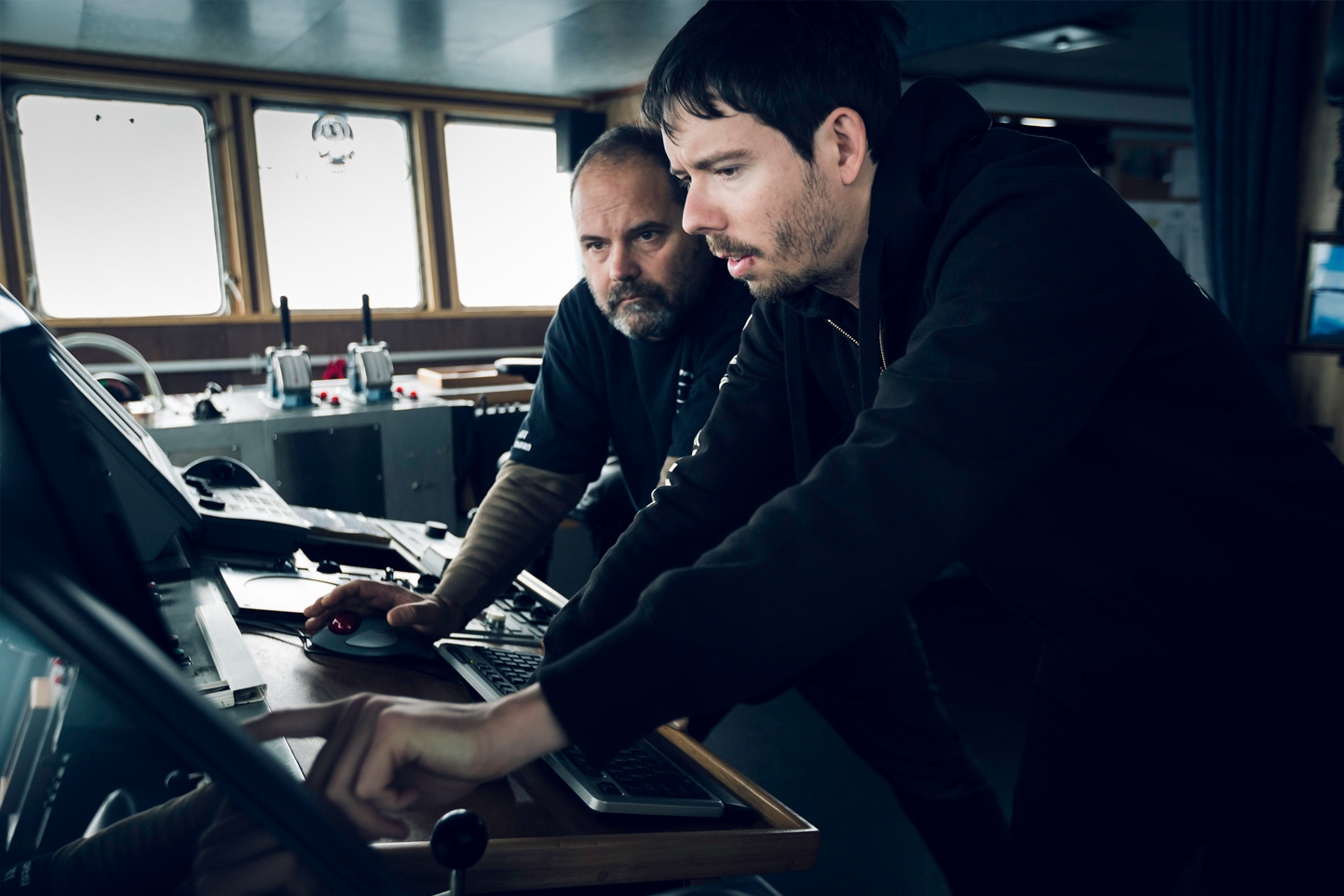 The early days of the chase were dangerous. Pictured: Crew member Adam Meyerson and Captain Hammarstedt take a look at ice obstacles from the bridge: “The one danger you always do worry about in the ice is getting beset,” said Meyerson. “The pack ice closes in behind the vessel pretty rapidly. You certainly can’t back up because your propeller and rudder, the most vulnerable parts of the ship, are on the stern.” Photo credit: Simon Ager 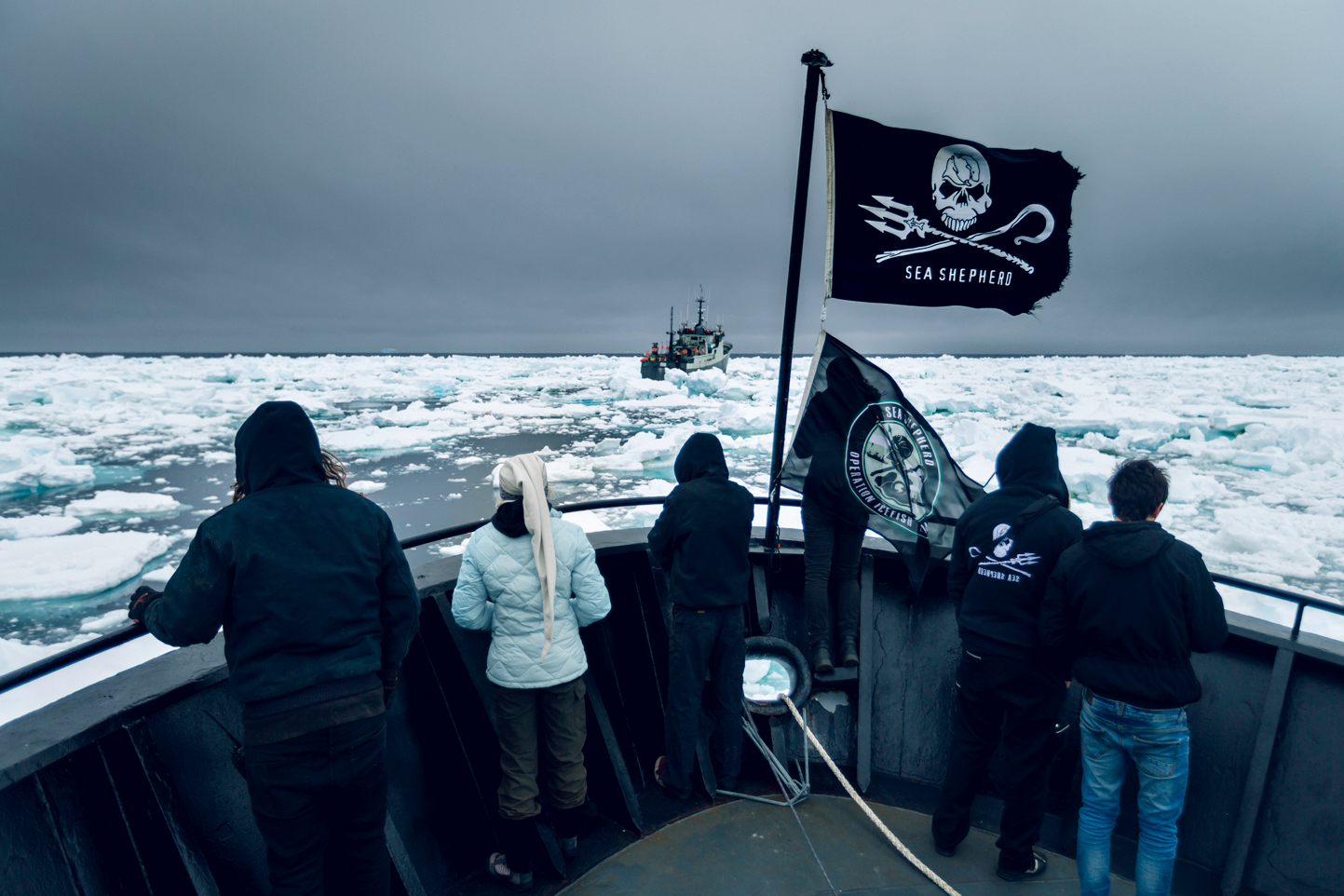 As their journey took them further, the ice got worse. “It really gets hard to steer at this speed” observed Meyerson with furrowed brow as the Thunder led them into thicker and thicker ice. “You can hear the ice grinding down the side of the ship. It’s just a sound that gets right into your stomach.” Hammerstedt added, “We just have to keep bouncing off these like a pinball machine.” Photo credit: Simon Ager 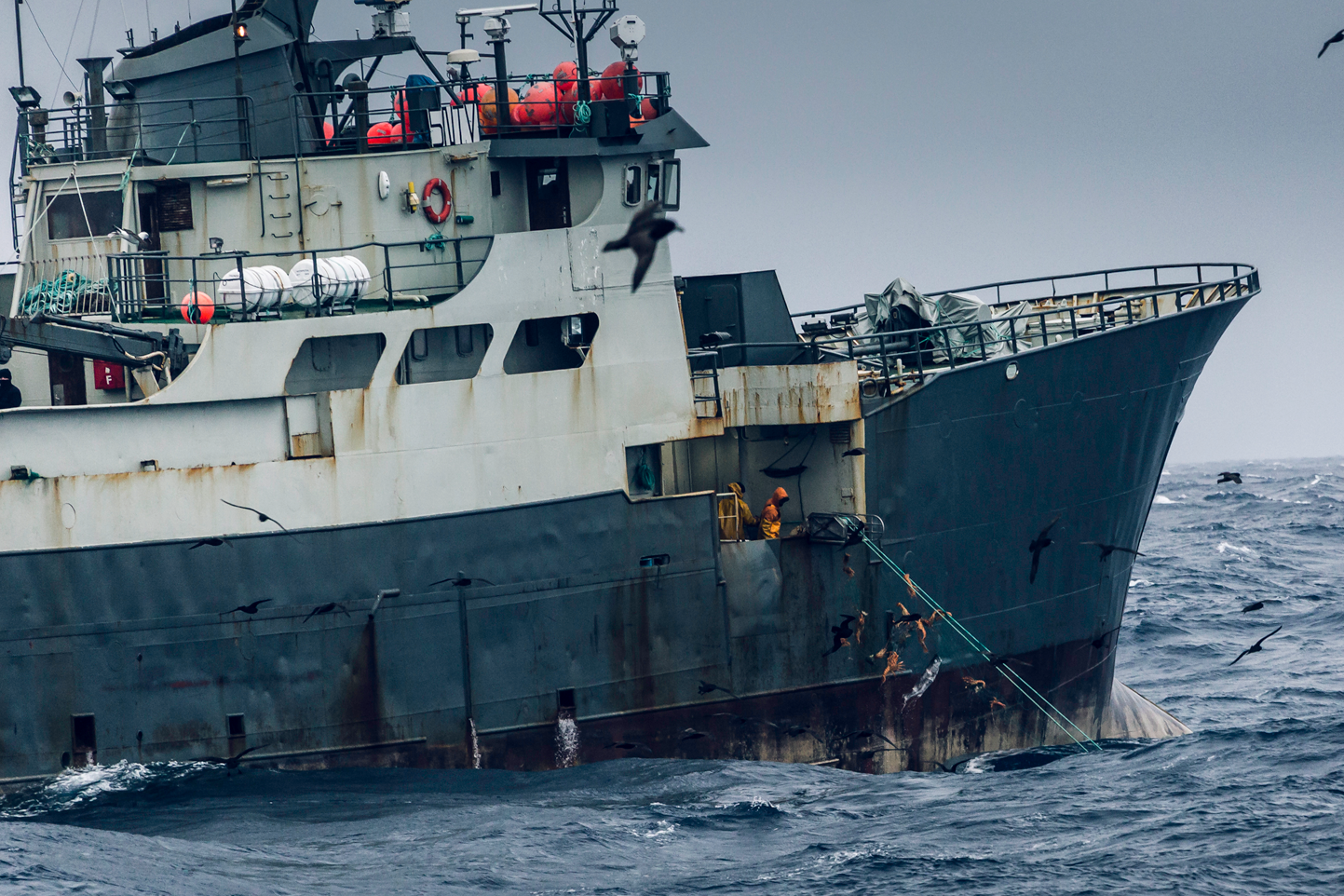 As the Sea Shepherd drew closer, they caught the Thunder red-handed pulling up nets and buoys, illegally fishing where they shouldn’t be. Meanwhile, Captain Chakravarty and his crew made it their mission to find these nets that could be used for evidence in a future trial. “These illegal vessels use a very destructive form of fishing called gillnets, which run for kilometers and sit at the bottom of the ocean,” said Chakravarty. “Toothfish are the controllers of the marine ecosystem. Their survival is very important to Antarctica. But not only are they catching the toothfish, they’re also catching everything.” Photo credit: Simon Ager 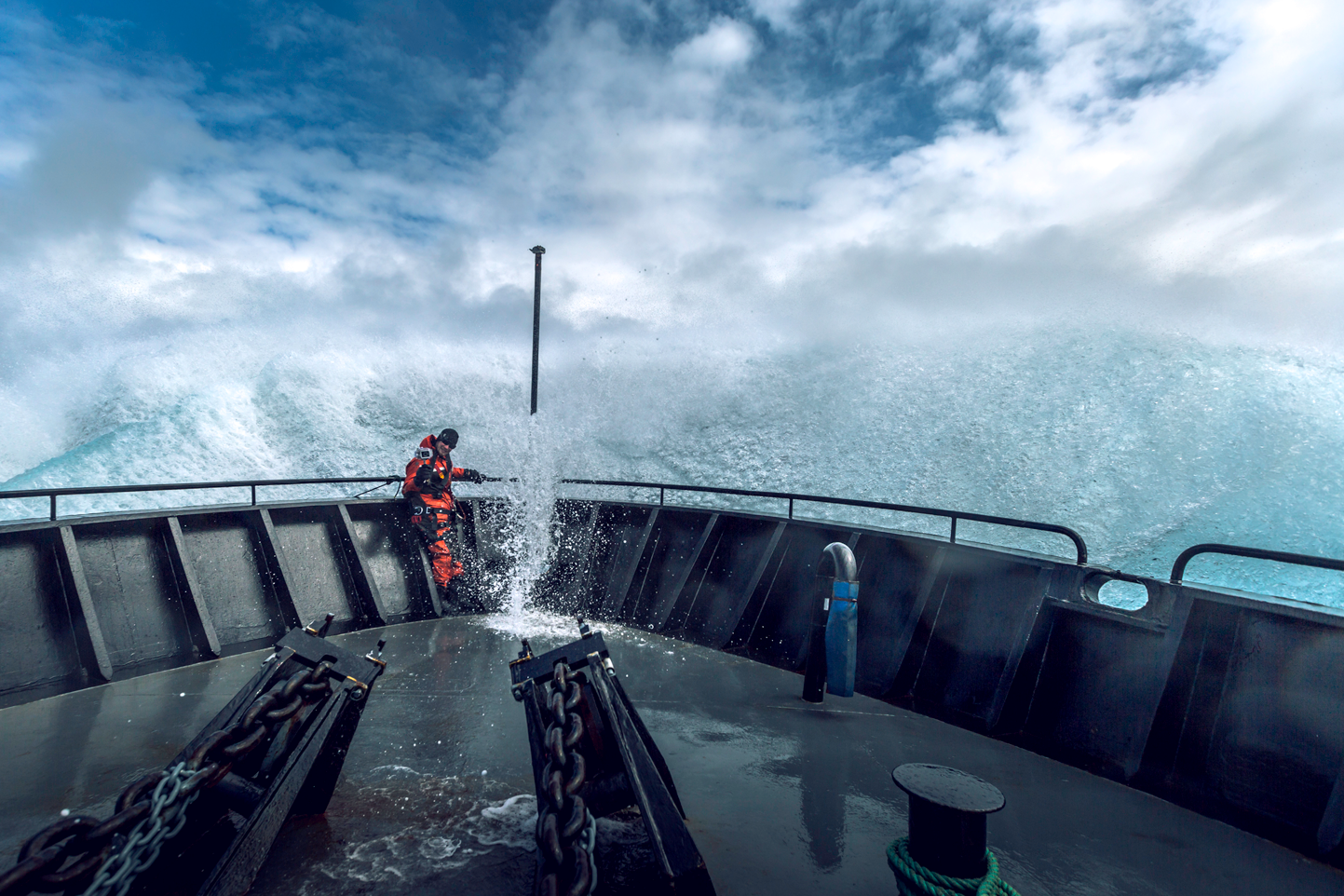 “In this weather it’s very dangerous to go out on deck,” said Captain Hammarstedt. “Certainly the biggest risk to any crew member would be going overboard, in which case it’d be very, very difficult to recover them.” The Sea Shepherd crew members are well aware of the risks, as are the film crews. Although sometimes they get surprised by a big roller. Cameraman Joey McQuade and his camera survive this 30-foot wave over the bow to film another day. Photo credit: Simon Ager 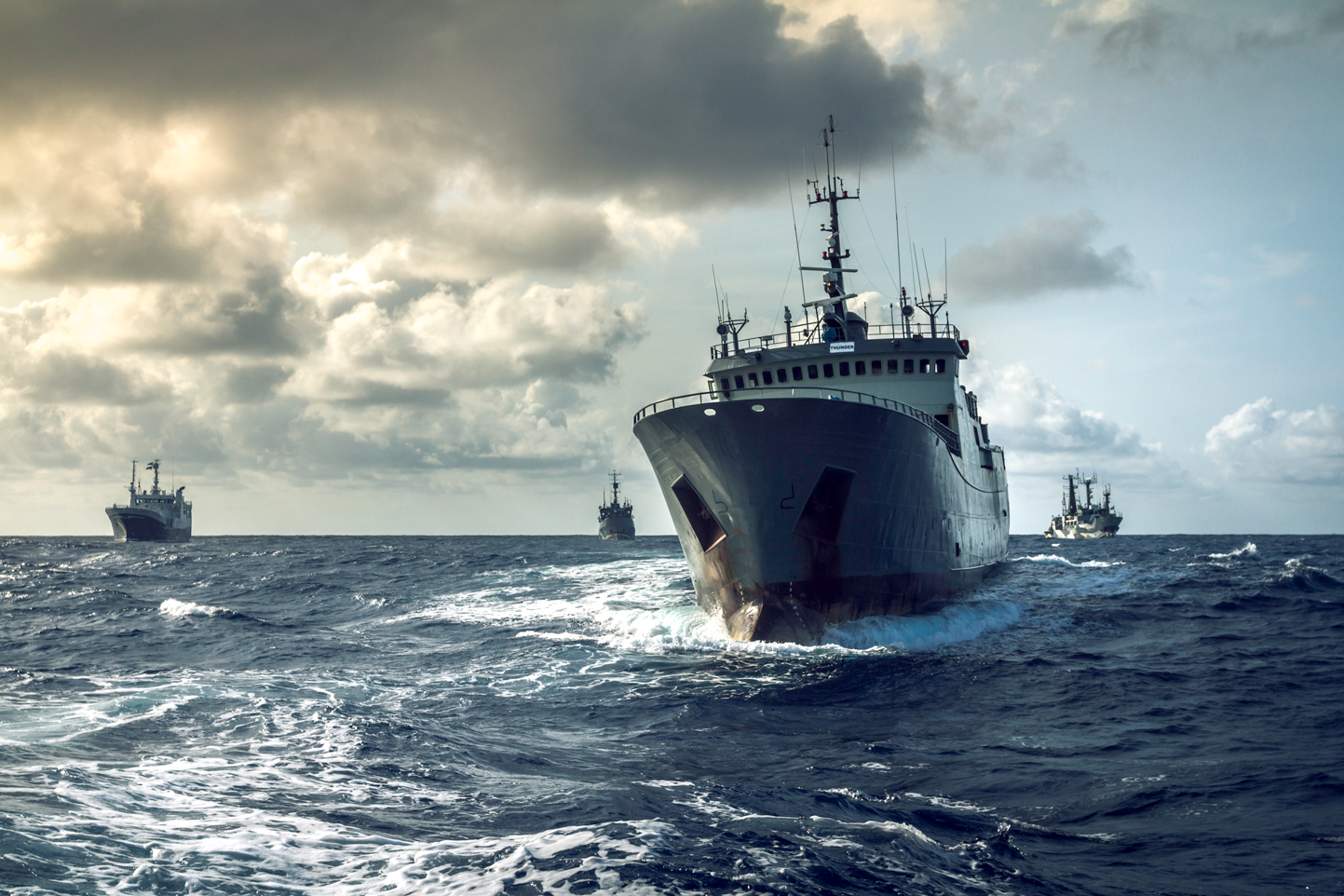 When the two Sea Shepherd vessels draw closer to the Thunder, Captain Hammarstedt reaches out on the radio: “Thunder, this is Bob Barker. You are fishing illegally. Shut down your illegal fishing activities immediately or we will have to intervene.” He then turns and explains to the camera crew: “More than half of the world’s population depend on the oceans for their survival. Illegal fishing completely jeopardizes any chance of there being sustainable fishing. When government lacks either political will, economic means, or the jurisdiction to enforce those laws, then it falls upon private organizations like Sea Shepherd to fill that role.” Photo credit: Simon Ager 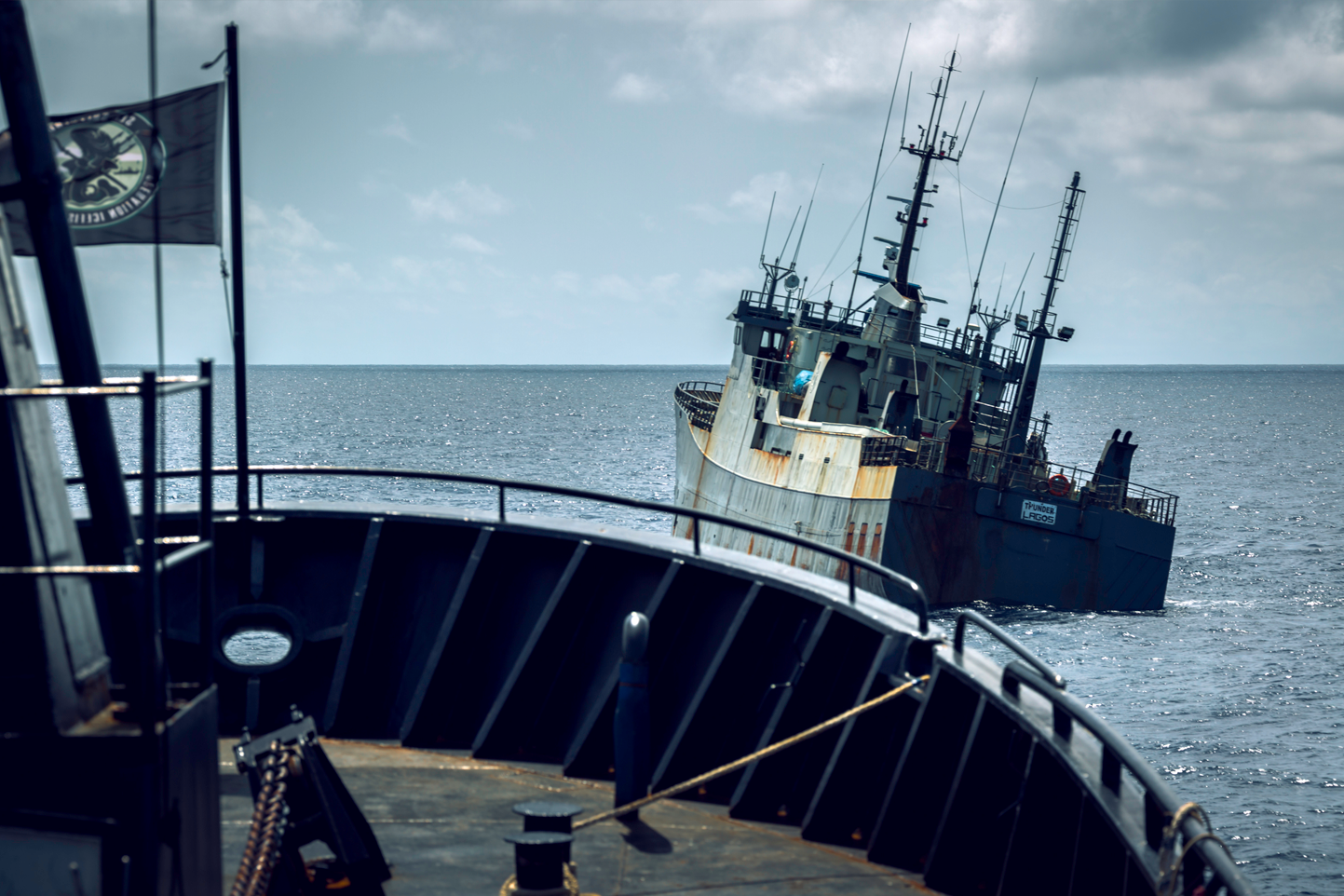 In the Atlantic, off the coast of Nigeria, the Sea Shepherd closes the gap between their bow and the Thunder. Captain Peter maneuvers into position while First Mate Meyerson talks about their resolve. “They think somehow that they are going to shake us. And be able to get away with continuing to pillage the oceans. It’s just not going to happen.” Photo credit: Simon Ager 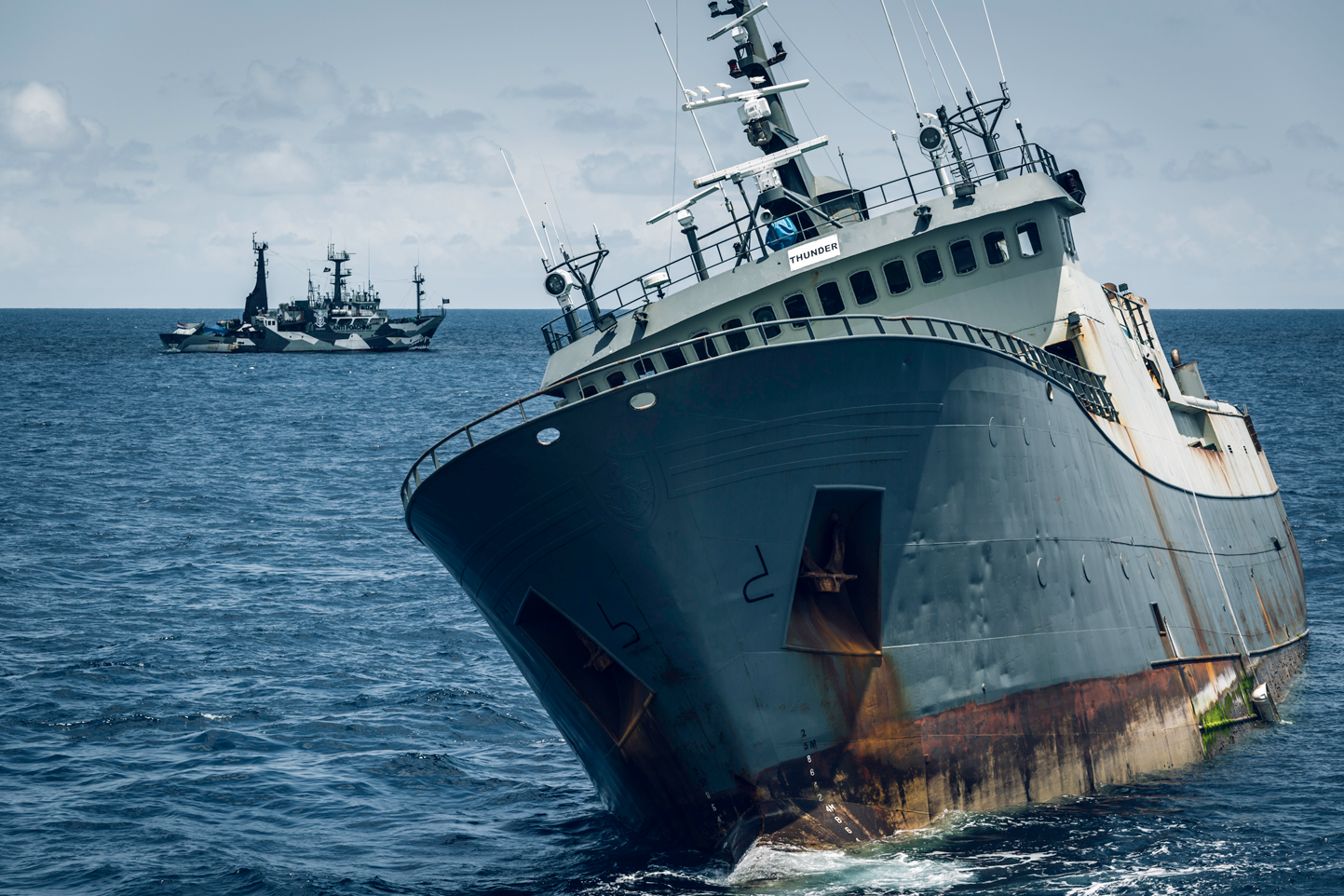 When Captain Hammarstedt receives the Mayday call, he is astonished. It’s a distress call. The Spanish captain of the Thunder has a desperate tone to his voice. Sea Shepherd translator Alejandra responds in Spanish. “Thunder, Bob Barker. Go ahead.” she radios to the Thunder, but all she hears is crackly static. And then, the Captain’s voice breaks through in Spanish. She translates: “He said he’s got a problem and they’re sinking.” Photo credit: Simon Ager 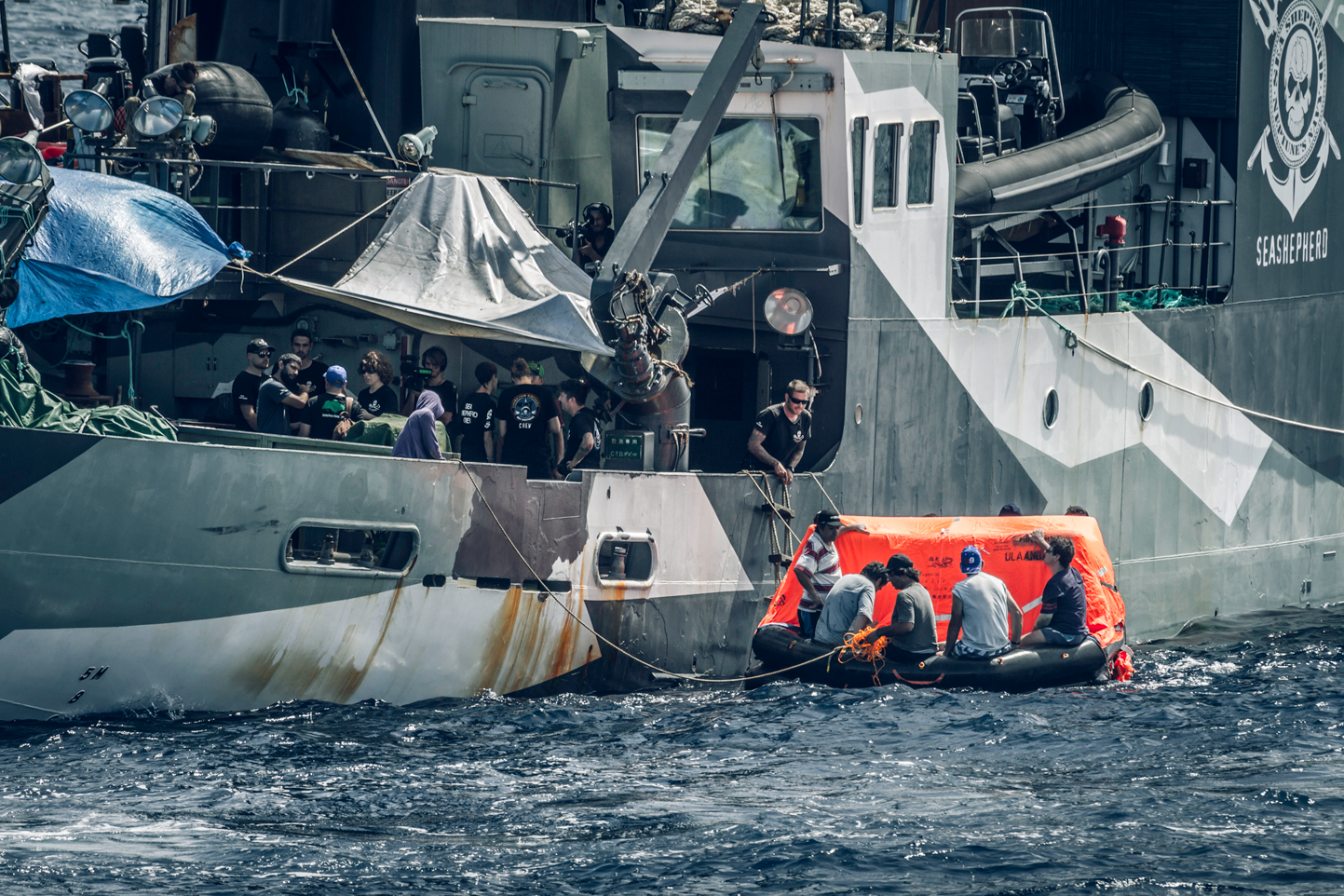 International maritime law states that vessels in the area are obliged to rescue anyone in distress at sea. But Captain Chakravarty is cautious: “Do not take the crew onboard until you have support on site. The Nigerian shipping directory has replied to the report that I sent out, saying it is very likely a ploy by the Thunder to stop you from chasing her and that the people that you bring on board could be armed, hostile and dangerous.” Photo credit: Simon Ager 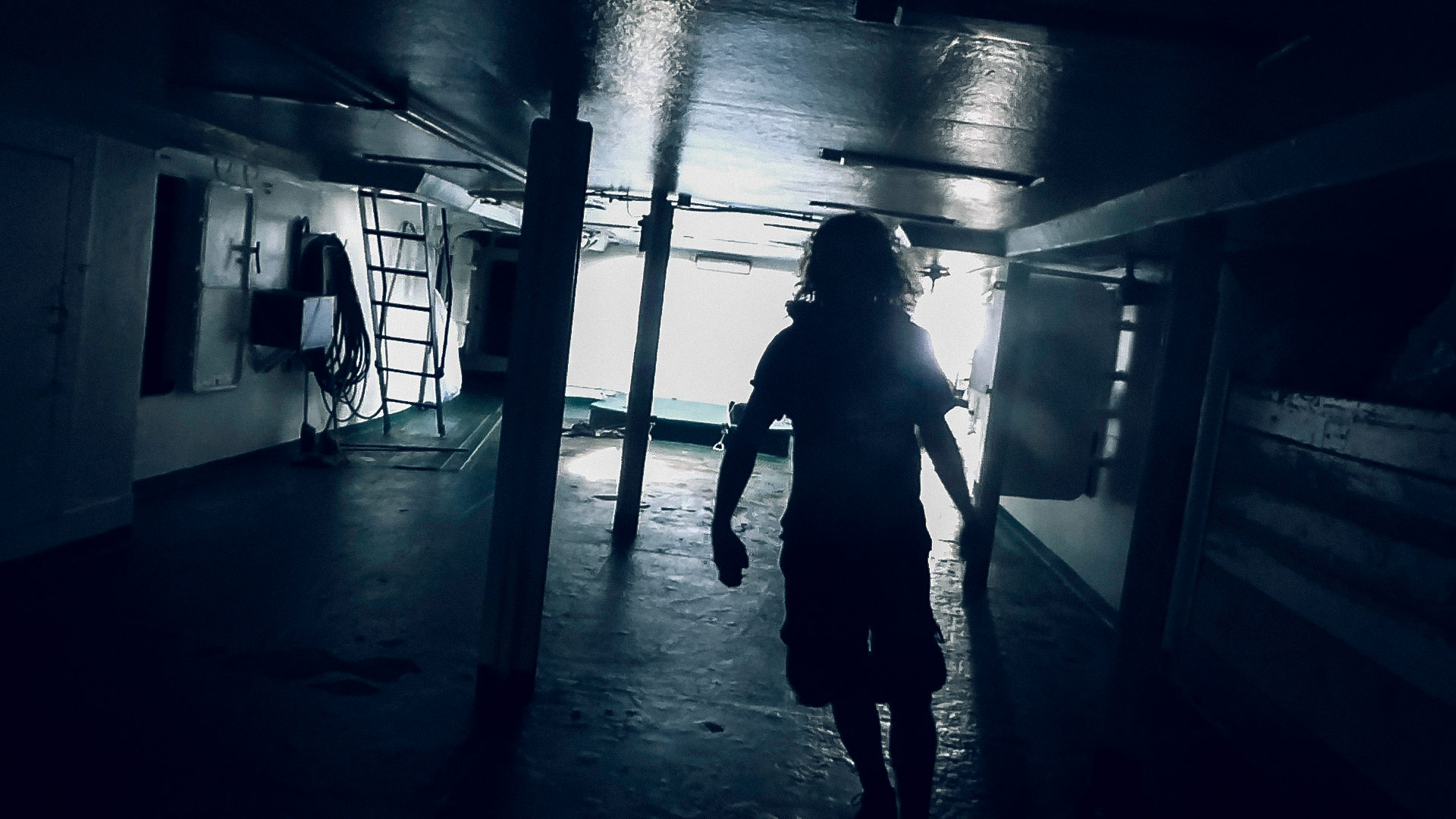 Thinking fast, the Sea Shepherd decides to get a few crewmembers onto the sinking Thunder and try to grab any last pieces of evidence before it sinks – computers, charts, nets and contraband fish. It’s a race against time, but Captain Hammarstedt knows it’s the right move. “When the captain of the Thunder sees that three of my crewmembers are boarding his abandoned vessel, I can see that his mood immediately sours as he realizes that we may be able to get some of the evidence that he hasn’t been able to ensure would go down to the bottom of the ocean,” said Hammarstedt. Photo credit: Simon Ager 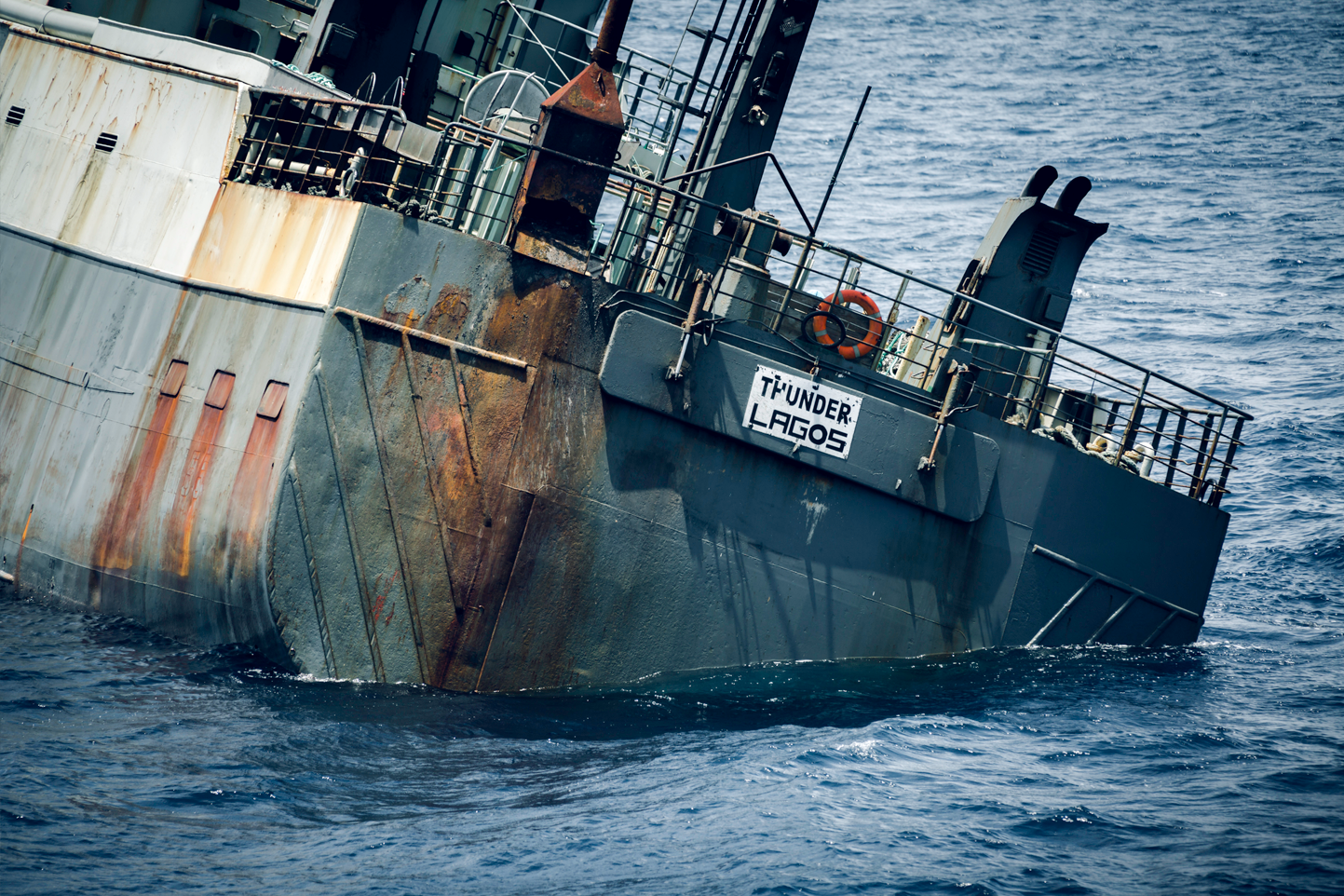 As the doomed ship lists farther to starboard and starts taking on more water, Captain Hammarstedt grows more and more concerned that Erwin and the other crewmembers are still on board. Yet they can hear in his voice that Erwin is excited by the evidence he’s finding. “That’s all toothfish there. I see bags and bags of it!” But Meyerson was insistent, they had to get off immediately. “It’s going down fast!” yells Meyerson over the radio. “Erwin, Erwin. Bob Barker. Get off that ship, over!” Photo credit: Simon Ager 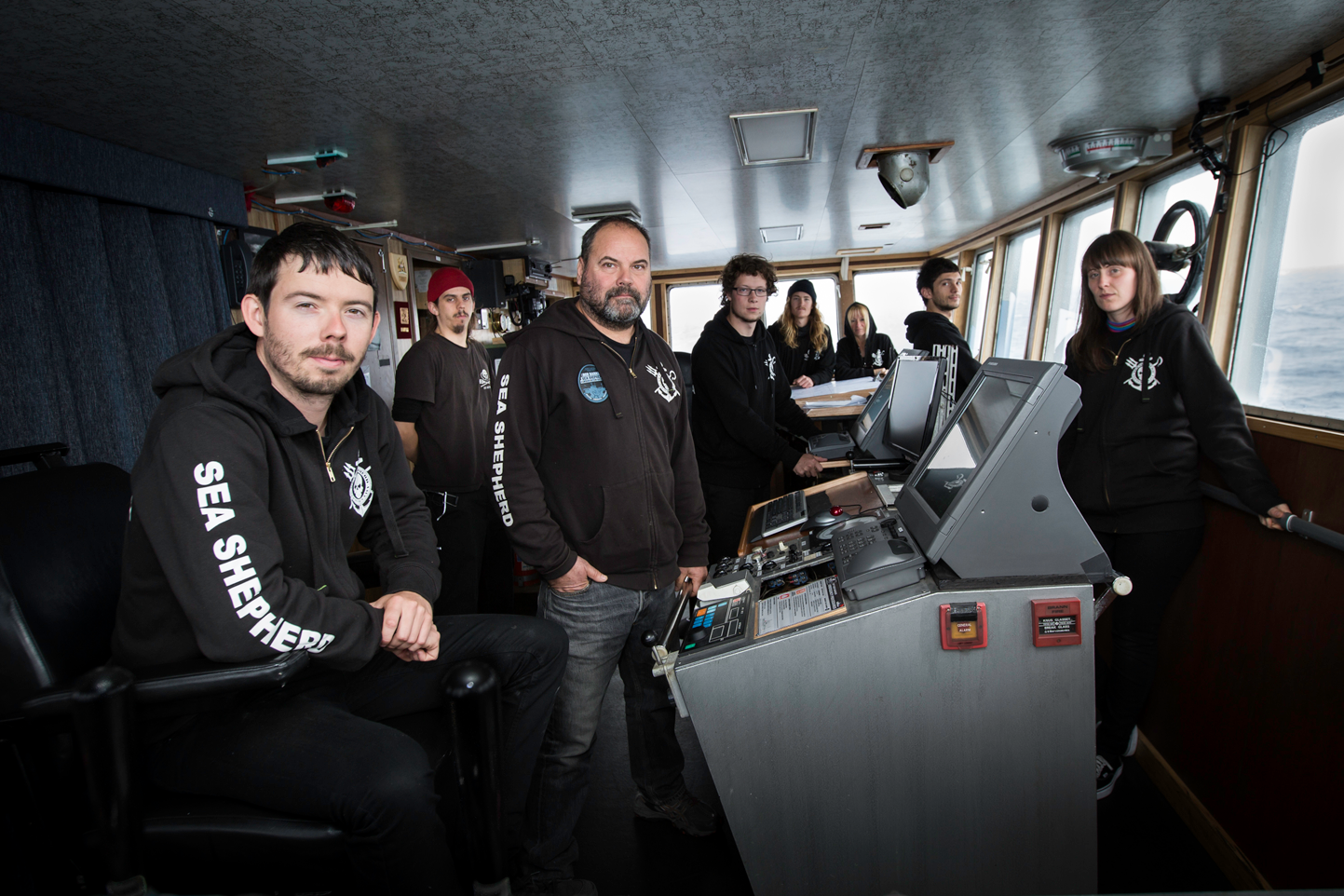 Finally, all the crew are back on board, and Captain Hammarstedt is relieved. “After finding the Thunder down in the Southern Ocean, we chased them across three oceans, he said. “Over 110 days we covered over 10,000 miles. And the courage of my boarding team has ensured that the legal case against the captain and officers of the Thunder can continue.” Photo credit: Simon Ager

Chasing the Thunder is a 96-minute re-cut of the award-winning, six-hour Ocean Warriors TV series that originally aired on Animal Planet in the US in November, 2016. Winner of a prize from the Humane Society of the United States, a Genesis Award for Outstanding TV Documentary series, and the top prize for Best Limited TV Series 2017 from the Jackson Hole Film Festival, the full Ocean Warriors series includes not only the Thunder drama but also six other exciting stories of activists fighting crimes against the oceans.

The full series can be screened on Animal Planet GO. DRG is the international distributor.