Can the arts change the creative trajectory of a young person’s life?

At Vulcan Productions we think the answer is: Absolutely.

Our latest production, “STEP,” which premieres in U.S. theaters today, has the power to reach thousands of young people and highlight the power of the arts for new audiences.

This feature documentary is a powerful story chronicling the trials and triumphs of a group of seniors on the step team at Baltimore Leadership School for Young Women as they prepare to be the school’s first graduating class. Many of these girls are the first in their families to go to college. Director Amanda Lipitz captures the critical senior year as the women prepare for the hardest competition of their step career while juggling the jitters of awaiting their college applications results.

Earlier this summer, we were fortunate to host some of the incredible young women featured in the film at our offices in Seattle. We even got to take a step lesson! 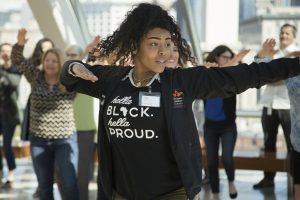 One of the stars of ‘STEP’ gives a lesson to Vulcan employees.

Acquired by our partners at Fox Searchlight, “STEP” is poised for an incredibly successful theatrical release. Watch the trailer.

A longtime supporter of the arts, Paul is also committed to making the classics – including ballet – more meaningful and relevant to younger audiences. To make the “classics” cool again, and more accessible to new audiences, we launched “Pointe to Pop” with an initial video developed through a partnership with Academy Award-nominated and Emmy-winning director Steven Cantor. to fuse the power of pop music with ballet. The result: A stunning video for Charlotte OC’s song “Medicine Man” featuring a moving performance by Tiler Peck, the prima ballerina and principal at New York City Ballet (NYCB) that fuses the power of pop music with ballet.

Both “STEP” and “Pointe to Pop” illustrate what’s at the core of Paul’s vision and our work: Using storytelling as a catalyst to spark action and create lasting impact.

At Vulcan Productions, we’re responsible for translating Paul’s ambition of tackling some of the hardest problems and his vision for making positive change on the world. We develop and produce movies, television specials and series, and digital content that entertains, inspires, and changes the way people understand the world’s hardest problems. Our films, television series and digital content spark ideas and turn action into measurable impact. We produce across many genres from science and science fiction to history to the arts to biodiversity to current social issues.

As we work for impact, we are constantly striving for innovation in our storytelling. We’re excited to begin exploring new platforms for our content, like giant screen and virtual reality experiences, to help reach an even bigger audience and make a bigger difference.

In the coming weeks, we will announce new and groundbreaking projects we are developing this year! Follow us on this journey to continue changing the world one story at a time.

And take advantage of this chance to experience the power of “STEP” in theaters.

The Ivory Game Debuts on Netflix

The Ivory Game Debuts on Netflix