Dr. Rick Horwitz is the Executive Director of the Allen Institute for Cell Science. Through team science, big science and open science, he and the team are working to make sense of the complex machinery of our cells.

We sat down with Horwitz to talk about what drew him to the Allen Institute, the Allen Cell Explorer and how this research will be a game-changer in the study of cells and the real-life issues it could solve.

What drew you to the work at the Allen Institute for Cell Science and how does it relate to what you were doing at the University of Virginia? 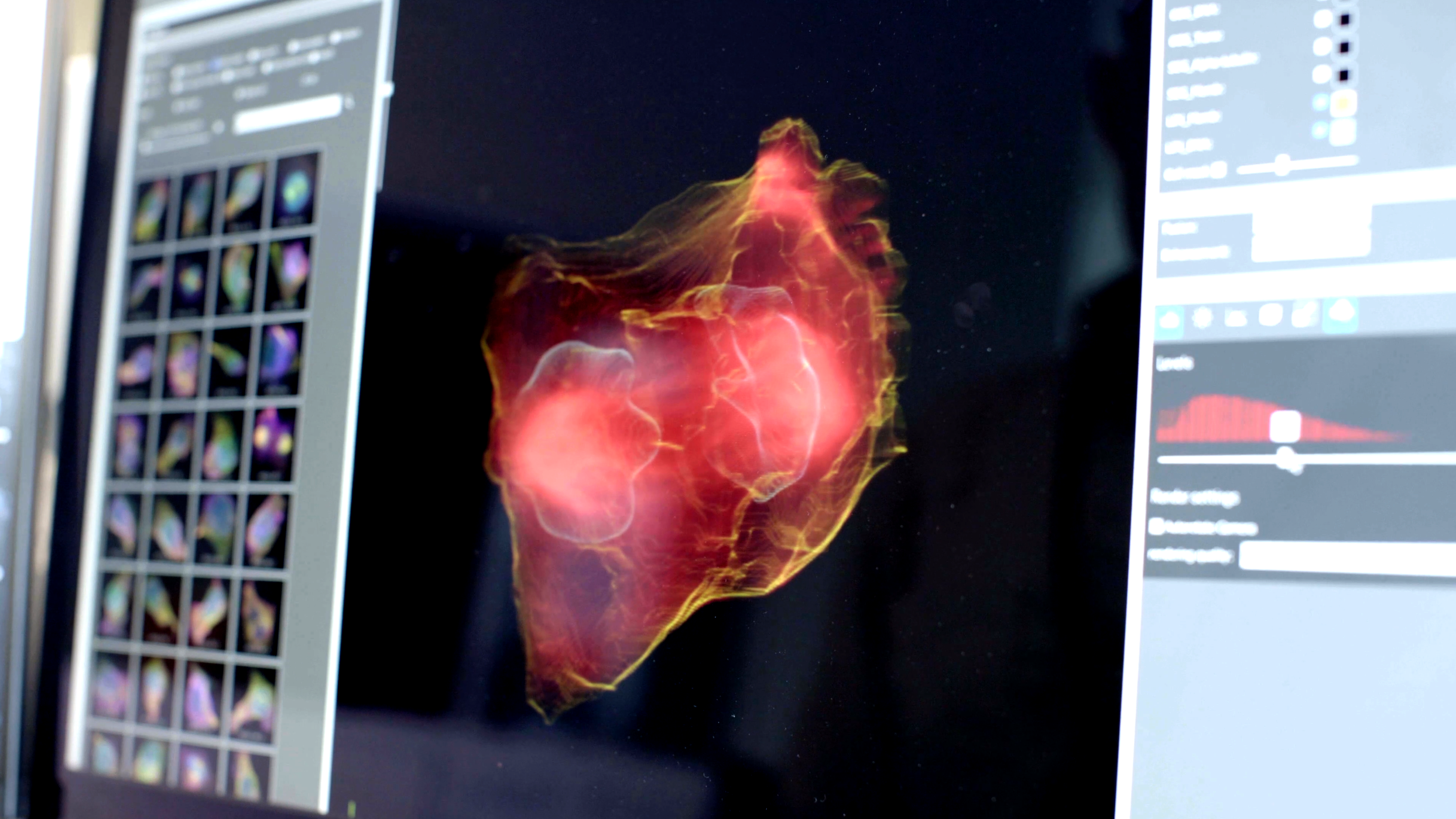 The Allen Cell Explorer in action.

The stuff I was doing in my own lab was becoming increasingly incremental. What that means is, our projects have a life cycle. They start out and they’re really exciting at the very start. Then they kind of grow, they become well known and they kind of become incremental where we start doing smaller and smaller things as we get increasingly sophisticated and detailed in the questions that we answer.

I was working on the problem of cell invasion, how cells get from place to place, which happens in the immune system all the time. It happens in tumor biology at times that we don’t want it to happen. I’ve always been studying cells. I’ve been using microscopes. The idea was that maybe some of the ways we’ve studied cells with isolated parts, we could study them in the cell in their native environment.

The thought of doing that was really, really exciting. That was sort of the main driver that got me interested in it and it spawned directly off what I’d done before. I had also run a big consortium, which was one of the first NIH efforts to do large-scale basic science. This was a multi-institutional, with 40 investigators. It was huge. That had come to an end because it had a mandatory 10-year sunset. At the end of that, I was thinking about how that might be improved and how to do big-scale science, the kinds of things that we can’t do in our lab, that would impact the community as well as our field. This just filled the bill perfectly.

Tell us more about the Allen Cell Explorer and how it will change the way cells are studied.

The Allen Cell Explorer is a tool on the one hand and there’s science on the other hand. The science side of it is that we don’t really know how cells work. There’s a big missing piece — we haven’t watched the cells. Imagine a football game where you watch the replays and you see what specific players did at specific places and specific times, but you’ve never watched the whole game. That’s what we’ve been doing with cells. We can watch a small piece of a cell at a particular time, but we’ve never watched the whole thing. Imagine the power of a coach or a player seeing the play evolve. As the play evolves, you know what’s going on. If the line is pulling back, there is a player going downfield, you know it’s a pass play. We too can read what the cells do and try and figure out how they work that way.

The other side of it is, after the game, the coach goes and looks at the film for strategy. Similarly, if we study our movies of cells, we can do strategy as well. The missing piece is, we don’t watch cells in action. Instead, we study molecules from them in a test tube or we study them, just these small parts. This is an enormous opportunity to fill in a huge void in what we understand.

On the technical side, what the Allen Cell Explorer does is offer a portal where one can see all the things that we’ve done. Visualizing these cells in 3D and in real-time is really challenging. It’s not easy. It’s also a place where all of our tools are. It’s both a platform and also a resource.

What gaps in learning will the Allen Cell Explorer fill?

There are three things there. One is, what are these states? What is a state? How do cells move from state to state? How does a cell become a heart cell or a liver cell? We want to know, when it is that cell, how do the genes and the environment that this cell resides in give us that particular cell? Those are three huge problems that stem from 19th-century biology that remain unsolved, but the technology is such that it’s accessible now.

What are some real-life issues that this understanding of the cell could solve?

There’re a number of things. The first thing is that we’re doing this with stem cells. The stem cells we use are skin cells that derived from you or me. The neat thing about those is that they’re reprogrammed so that they become embryonic-like. We call them “pluripotent,” which means they can become all kinds of things. These pluripotent embryonic-like stem cells, we can induce them to differentiate into heart, muscle, nerve, all kinds of things, but the really cool part is that they serve as a disease in a dish model.

These cells, if they come from you and if you have a genetic disease, we can take the cells from you and know that they’ve given a disease in you. We can get them from you, grow them in a dish, study them, recapitulate your disease and figure out what’s going on. What we’re doing is providing a platform and a set of tools in a way and at a depth that hasn’t been done before.

We’re doing this again, by studying each of the major parts of the cell. We have markers now for the energy factory of the cell, for the scaffold of the cell, for the nucleus of the cell. We have markers for all the major structures. Cells are put together such that they’re structurally designed to do what they’re supposed to do. It’s like architecture. Function follows structure. They’re set up to do specific things. We don’t understand that yet, but with these markers, we’re starting to understand it. Then, we can see in a disease what’s gone wrong.

These could also be used for regenerative biology and replace tissues and anything that’s defective, particularly as people get older or if there’s a mutant that’s creating a problem.

The potential for drug discovery is huge. They usually screen drugs looking at if the cells stay alive or if they die or if something goes X or Y, very, very large alterations, but what we found is that in the way the cell is organized, there is a very rich platform for studying cells and seeing toxicology effects of drugs or just what the drugs do in ways we’ve never had before. That’s going to be a game changer.